“While only a third of our members are employed in road construction, about 75 percent of our on-the-job fatalities occur there,” said LIUNA General President Terence M. O’Sullivan, who offered congratulations to the NELHSF for “its broad and determined effort to reduce these injuries.”

A panel of judges representing the American Road & Transportation Builders Association and the National Safety Council selected the winners. In accepting the award, Tri-Fund Field Coordinator John J. Anatone praised the leadership of NELHSF Administrator Robert P. Moretti and recounted the diverse efforts of the Fund’s staff and allies. 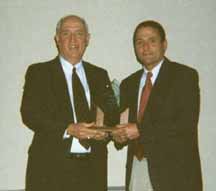 The campaign was highlighted by dissemination of the Fund’s Highway Work Zone Safety Manual and Pocket Checklist and a coordinated legislative, training and outreach program that targeted legislators, public officials, workers, contractors and the driving public in an effort to reduce work zone injuries and deaths.

“The strength of this effort was its duel approach-to warn drivers about work zone dangers while training those responsible for road construction about how to better protect workers’ lives,” said LIUNA General Secretary Treasurer and Labor Co-Chairman Armand E. Sabitoni who is from New England and also serves as Labor Co-Chairman of the NELSHF. “It was a job well done.”

On the legislative front, the Fund’s Legislative Liaison, Michael A. Traficante-along with Massachusetts Laborers’ District Council Business Manager Paul J. McNally-helped steer a law through the Massachusetts legislature to double fines imposed on motorists for work zone traffic violations. “We want to get the motorist’s attention,” says McNally who has been a leading proponent of the law. “It’s worked in other states, and we think it will make a difference here, too.”

Outreach to Laborers was conducted in a variety of ways. In a direct and on-going way, the Fund used its Field Health and Safety Specialists to conduct site visits throughout the region, offering toolbox talks, safety meetings and educational materials to workers and management staff, alike. The goal of the visits was to help Laborers, contractors, stewards and safety personnel understand technological, engineering and administrative controls needed to ensure safe, accident-free work zones.

To boost impact, much of the public outreach was planned to coincide with National Work Zone Awareness Week. The one-week national campaign was combined with a month-long New England initiative, called The Cone Zone. Joining forces, the NELSHF and American Automobile Association (AAA) of Southern New England distributed tens of thousands of roadway safety awareness reminders at worksites, health fairs, conferences and through the AAA’s 26 regional offices. The campaign was publicized through the AAA’s publication, Horizons, and through the NELSHF’s Update magazine and its Spotlight television show.

The Highway Work Zone Safety Manual served as foundation documents for all these efforts. “In publishing the manual, we had three goals,” says Anatone. “One, to protect and promote the safety of individuals involved with highway construction and maintenance. Two, to assist workers, employers, safety professionals and union representatives in improving work zone safety programs. Three, to suggest new strategies for affirmative hazard control and minimization of risk. Through the campaign, we more than exceeded our goals in all three areas.”

Moretti added, “The Fund was able not only to promote the important issues of work zone safety, but to actually have an effect on the attitudes and habits of those working and driving in the work zones of our region.”