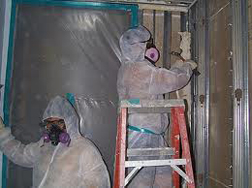 The scathing report, replete with first-person accounts of workers employed by unprincipled asbestos abatement contractors, charges a number of named companies with blatant disregard for their workers’ safety. It also highlights the inability of the federal government – the owner of many of the buildings mentioned in this report – to adequately enforce asbestos abatement regulations.

“In contrast to these shoddy and illegal operatives, our members and signatory contractors are well-trained and consistently follow the letter and spirit of the asbestos abatement regulations,” says LIUNA Vice President and Mid-Atlantic Regional Manager Dennis L. Martire, who also serves as a LHSFNA trustee. Despite adherence to the rules, union contractors still win the majority of asbestos abatement contract bids in the region. Nevertheless, MAROC issued the report in order to protect the market share of union employers who play by the rules and to protect the lives of all abatement  workers. “It is absolutely reprehensible that these contractors flout the rules that protect workers and the public,” Martire said.

Scott Schneider, the LHSFNA’s Director of Occupational Safety and Health and a asbestos expert who attended the MAROC media conference at the National Press Club, points out that, although the production and use of asbestos products has decreased tremendously since the 1980s, tens of thousands of workers are dying today from inhaling asbestos more than 30 years ago. The fibers lodged in their lungs, causing the slow, irreversible development of asbestos is and mesothelioma in ensuing years. “After all these deaths, we hope that we will not have to sacrifice another generation of workers as we clean up all the places where asbestos-containing materials were installed,” Schneider says.” Our regulations require adequate protection for abatement workers and the public.”

But, as the MAROC report makes clear, a number of contractors in the Mid-Atlantic region are subverting fair competition and sacrificing the future lives of their workers by removing asbestos without required protection. Among the failures highlighted by the report:

To curb malpractice in the industry and region, Martire and the MAROC demand tighter enforcement and more effective regulation:

The MAROC report is the result of a year-long undercover investigation by college student and organizer Ernest Ojito (video presentation) at six different contractors. Working for these companies, Ojito organized the workers to stand up for their rights by publicly exposing the conditions they faced. Seven of these workers provided published testimonials of their experiences of abuse and hazardous conditions. The employers cited in the report include Southern Environmental Services, Inc., L&M Construction, Bristol Construction, Asbestos Specialists, Inc., Team ACP, Potomac Abatement, Barco Construction and WMS Solutions, Inc. Two training centers were exposed: Global Environmental Solutions (a.k.a., Nilda’s) and Princeton Industrial Training Institute.

The full report is available here.