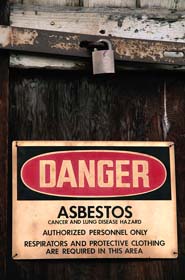 They’ll try again in 2005. And they’ll keep trying…until they find a way. Because there’s no other choice.

With all the guile of asbestos, itself – which assaulted workers quietly and without detection for decades – the asbestos crisis now undermines American justice. Today, with regard to asbestos and asbestosis, there is no justice. Everything has ground to a screeching halt.

The reason is simple: US courts are clogged with hundreds of thousands of lawsuits against asbestos companies; the companies are in bankruptcy; their insurers are in limbo; and the victims are suffering and dying without hope of compensation.

“It is repulsive that the corporations responsible for the damage and their insurance companies refuse to step up and provide compensation to the hundreds of thousands of workers who have suffered from exposures to asbestos, ” says LIUNA General President Terence M. O’Sullivan. 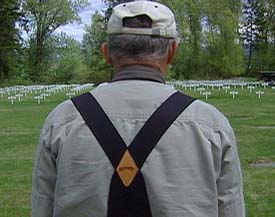 From 1920 to 1990, W.R. Grace and Co. mined and processed vermiculite in Libby, Montana. Indeed, for those seven decades the Libby mine supplied most of the world’s vermiculite.

Vermiculite is a natural mineral that, when heated, expands into a puffy material, well-suited for insulating. Under the brand name Zonolite, this insulation was used in 35 million American homes.

To ensure good relations with the Libby townspeople, Grace insulated all their homes, free-of-charge. Also, because vermiculite, when mixed in soil, helps plant growth, it was given to the city for its parks and school playgrounds. Vermiculite is everywhere in Libby.

Unfortunately, the vermiculite mined in Libby was laced with asbestos – in particular, tremolite asbestos, the finest kind of asbestos and the chief cause of mesothelioma. The company knew it, but kept it a secret.

Today, the whole town is contaminated, declared a Superfund clean-up site. One in three people in the county has asbestosis, and the cost of care for each will run between $300,000 – 500,000. Worldwide, more than 325,000 people have filed personal injury claims against Grace, and the company has filed for bankruptcy.

The whole story is captured in a riveting new documentary – LIBBY, MONTANA. It’s all told through the words of people who live and work in town and a W.R. Grace official who, under oath in deposition, had to tell the truth. As the trailer says, “LIBBY, MONTANA is a journey into the world of a hard-working, blue-collar community that exemplifies the American Dream gone horribly wrong.”

The film will soon be released on DVD. More information is available at High Plains Films.

With the court system in gridlock, all the stakeholders have turned to Congress, hoping it can find a way out of the morass. All sides are pressing their interests and claims, and, in typical American style, it has come down to political negotiations between the Senate Republican leader and his Democratic counterpart.

Today, hundreds of thousands of older Americans are dying from asbestosis and mesothelioma, diseases caused by the inhalation of microscopic asbestos fibers back in the 1960s and 70s. It takes that long for the fibers to scar and rigidify the lungs so that they no longer work – so that breathing becomes laborious, so that oxygen is required, so that medication must be administered to dull the relentless pain.

When they inhaled the fibers, their employers already knew and understood what was going on – that asbestos was deadly – yet had decided not to inform or protect them.

When they learned of this betrayal, these victims – including spouses and children who inhaled fibers brought home in the workers’ trucks and on their parents’ work clothes – hired lawyers and sued their old corporate bosses. In America, everyone is entitled to a “day in court.”

The first big case, back in the 70s against Johns Manville, proved both the medical connections between asbestos and lung disease and the corporate malfeasance that perpetuated the disaster. Other verdicts followed, and, soon, Johns Manville filed for bankruptcy protection.

In bankruptcy proceedings, to limit the wasted cost of defending lawsuits by the growing list of former employees, the company agreed to fund a trust to compensate all victims, and, in exchange, the judge decreed that further civil suits would be barred. Eventually, Johns Manville handed over all its assets and went out of business.

However, in succeeding years, the demands on the trust far exceeded its capacity to pay. Today, Johns Manville victims receive five cents for every dollar of compensation to which they are entitled under the original trust agreement.

Unfortunately for the nation, Johns Manville was not the only corporation that commonly and knowingly exposed its workers to asbestos. Throughout the 1980s, the lawsuits mounted. Today, there are 8400 defendants, and more than 70 companies have followed Johns Manville into bankruptcy proceedings. The court system is crammed with lawsuits that have no realistic possibility of being tried on their merits.

Thus, all parties have turned to Congress in hopes of a legislated solution.

“Congress must step up and pass an adequate asbestos compensation bill that will provide for the thousands of Laborers and their families and the hundreds of thousands of other workers who have suffered from the terrible effects of these exposures,” says O’Sullivan.

The failed Johns Manville trust serves as the starting point for such a solution. Because everyone agrees that it failed to anticipate the extent of claims and was inadequately funded, the most basic issue in the Senate negotiations, so far, has been the amount that the companies and their insurers must put into the proposed fund.

The original bill, sponsored by Senate Judiciary Chairman Orin Hatch (R – UT), called for $109 billion with special authorization for the trust to keep all interest on its investment, increasing the total to $124 billion. Labor unions and trial lawyers, as well as victims groups, all complained that this was far too little. Independent observers agreed. The Rand Institute for Civil Rights, noting that $54 billion has already been paid, suggests that the final tab could exceed $200 billion.

Because he is a Republican from Utah, Hatch undoubtedly has ties to the mining industry, but as the immediate past chair of the Judiciary committee he also articulates the views of judges and the insurance industry, both of whom are intimately involved in bankruptcy proceedings. While the primary negotiations for a compromise were conducted by Senate Majority Leader Bill Frist (R – TN) and Minority Leader Tom Daschle (D – SD), Hatch spent last summer alternating between cheering them on and complaining about the rising contribution figure.

Negotiations opened in July with Frist suggesting $136 billion. The AFL-CIO, speaking for the victims, insisted that $152 billion was the only acceptable minimum. A month later, Frist came back with $140 billion, and Daschle indicated a willingness to accept something less than $149 billion. The gap continues to narrow. However, Daschle lost his bid for re-election so the Democrats will have to find a new leader for the next session.

At the same time, other issues remain on the table. A key one is qualifications: what medical criteria, evidentiary burdens and individual compensation levels will be accepted? Last year’s bill, for instance, would have required former W.R. Grace and Co. workers (see sidebar) to secure approval of their claims by a special medical advisory committee. Montana Senator Max Baucus (D) lobbied Hatch to remove this requirement, but it could resurface in next year’s bill.

Another key issue is pending claims. Daschle – who was not re-elected and has been replaced by Nevada Senator Harry Reid – wanted to allow these to proceed in the courts. That was one reason he was willing to accept a lower total compensation package for the trust. Frist wants all pending litigation dismissed and moved into the trust. That would ease the burden on the courts and uncertainty for insurers, but, critics say, increase the total compensation necessary for the trust to meet all obligations.

The final issue is the so-called “evergreen” issue. If the trust runs out of money, who will refurbish it? Many companies will be bankrupt and out-of-business. The whole point for insurers is to know future obligations, so they oppose any possible assessments on their assets. The Senators, unwilling to consider further increases in the federal deficit, have ruled out a government backstop.

“American workers deserve better,” adds O’Sullivan. “Laborers deserve a safe and healthy workplace with no chance for bringing exposures home to their spouses and children. This should never fail, but if it does, as it has with exposures to asbestos, there can never be enough compensation for them and their families. I can only say this to the U.S. Congress: Let’s get the job done.”