In a breakthrough for work zone safety, the state of Washington adopted emergency rules on May 12 that impose significant new requirements on dump truck drivers who are backing their vehicle inside roadway worksites.

The new rules require dump truck drivers to have, in addition to back-up alarms, either an observer signaling when it is safe to back up or a mechanical device such as a video camera that provides the driver with a full view of the area behind the dump truck. 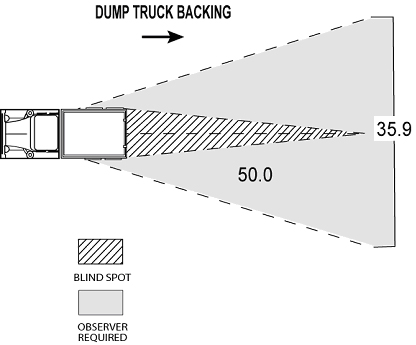 The diagram above defines the backing zone. Distances are reported in feet.

Washington is the first jurisdiction in the United States or Canada to require anything more than the standard back-up alarm. The rule was adopted after backing dump trucks killed six workers in the state since 1999. All the trucks had audible back-up alarms.

“Washington isn’t the only state that’s had significant numbers of these types of fatalities,” says LIUNA Northwest Regional Manager Mano Frey. “They are a serious problem everywhere. We hope this decision will encourage other states to take action as well.”

Of this last group, half (16 percent of all work zone fatalities) are killed by backing equipment, primarily dump trucks.

The current OSHA rule states, “Any construction vehicle with an obstructed rear view must have a reverse signal alarm distinguishable from the surrounding noise level, or a spotter.”

Most construction vehicles have back-up alarms, so spotters are not used. Yet, frequently, the alarms are inadequate. In 28 percent of OSHA-investigated fatalities, the alarms were inoperable. “That’s one problem,” says LHSFNA Senior Safety and Health Specialist Walter Jones, “the warning devices break. But think about it. In most backing fatalities, they weren’t broken. The alarms worked fine, but they weren’t enough to prevent a death.”

This is because work zones are very noisy places. Not only are there many construction vehicles operating at once, there frequently is a loud line of heavy traffic passing nearby. The elevated background noise desensitizes workers and renders them unable to quickly distinguish a sounding back-up alarm.

“We have been big proponents of spotters being used during all backing,” says Jones, “and we have been pushing for truck manufacturers to employ, as standard, rear view video, sonar or radar devices to prevent backing injuries. This new Washington regulation is a significant development.”

Jones points out that Washington was the first and only state to require rear view cameras on delivery trucks. That led UPS, then headquartered in Seattle, to install rear view cameras on all its trucks throughout the country. Other companies added sonar or radar devices. “Sometimes, a breakthrough in one place can influence the whole industry,” he says.

As health and safety professionals, the LHSFNA staff recommends technological interventions – like cameras, radar or sonar – over the use of spotters. One out of eight workers killed in back-up incidents was spotting at the time. “Even a spotter can get lost in the large blind spots of a backing truck,” Jones says. “But,” he adds, “no truck – even one with an alarm – should back-up in a work zone without someone or some thing checking its blind spots.”