Barred on Cigarette Packs, Graphic Ads to Run on TV

When gasping-for-breath smokers say cigarettes aren’t worth it, it’s a lot harder to ignore. That’s the thought behind the U.S. government’s first paid anti-tobacco campaign. 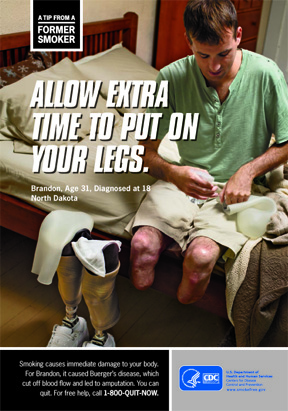 In a series of ads running in newspapers and on billboards, TV, radio and social networking sites, clearly ill smokers implore people not to pick up the cigarette habit and suggest tips for quitting. The campaign was unveiled just days after U.S. Surgeon General Regina Benjamin reported tobacco use among teens to be a “pediatric epidemic.”

Educating the public to tobacco’s dangers “might be compelling,” Leon wrote, “[but] an interest in simply advocating that the public not purchase a legal product is not.” He agreed with the companies that the images were not realistic, educational portrayals of smoking’s hazards and that the requirement is nothing but an emotional ploy to convince people not to buy their products. Tobacco companies “share a responsibility to provide tobacco consumers with accurate information about the various health risks associated with smoking,” said Martin L. Holton lll, executive vice president and general counsel for tobacco giant R.J. Reynolds, “[but] the goal of informing the public about the risks of tobacco can and should be accomplished consistent with the U.S. Constitution.”

The images may still be headed for cigarette pack display. The Department of Justice has appealed the ruling.

Restrictions on the marketing and sale of e-cigarettes in the United Sta...

A law that is likely to have a positive outcome for public health goes i...

Co-worker Smoking Can Endanger Your Baby

Congratulations are in order if you are expecting and quit smoking to he...

E-cigarette users may soon be buying their favorite flavor of liquid nic...

E-Cigarette Use in Teens at Center of Pending…

As the Food and Drug Administration (FDA) moves toward finalizing regula...