The warning signs can be glaring, like an unusual lump or a nagging cough. They can also be innocuous, such as a lack of appetite or general fatigue. Regardless, none of these symptoms should be ignored. All may be possible indicators of cancer. Cancer, simply stated, is out-of-control cell growth – the result of environment, lifestyle, diet or genetic predisposition – and all parts of the body are at risk.

According to the American Cancer Society (ACS), half of all men in America and one-third of all women will confront cancer at some point during their lives.  The figures are not much different in Canada. The Canadian Cancer Society indicates that 45 percent of men in Canada and 39 percent of women will be diagnosed with cancer during their lives. What these figures mean for LIUNA members and their families is that you have a one in four chance of dying from cancer if you are a man and a one in five if you are a woman.

Fall is the time of year when both the ACS and the National Cancer Institute (NCI) ramp up the focus on early detection and treatment. Local unions and health and welfare funds should take heed and conduct their own screenings and awareness campaigns.

“It’s important to be proactive about your health. Routine medical exams and screenings should be regarded as annual tune-ups,” says Noel C. Borck, the LHSFNA’s Management Co-Chairman. “We should do for ourselves what we do for our cars. This is general, common sense maintenance.”

Below is a Handy Health Screenings Schedule prepared by the New England Laborers’ Health & Safety Fund. 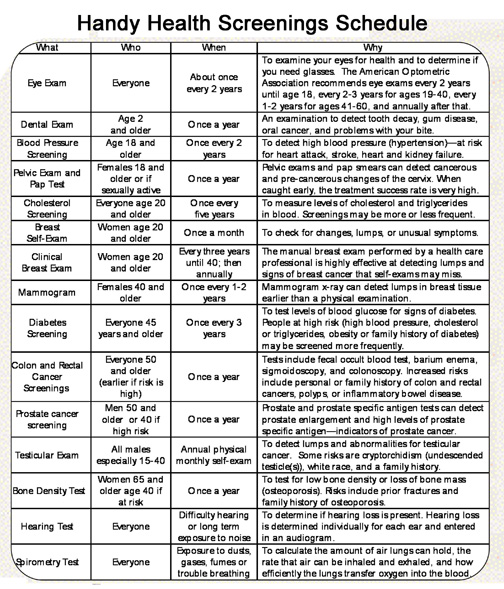 The good news is that, if caught early, colorectal cancer has a high survival rate. The problem is that in the early stages, colorectal cancer symptoms are subtle: bloating, weight loss or fatigue. You may also experience diarrhea, constipation or dark patches of blood in the stool. If any of these conditions persist, let your health care provider know.

The most effective tool for detecting colorectal cancer is a colonoscopy. This procedure, which involves the use of a long, flexible, lighted tube, allows the doctor to look for and remove growths, called polyps, and later test them for signs of cancer. A colonoscopy usually takes 30 to 60 minutes. Medical professionals recommend starting testing beginning at age 50 for most people; but earlier if there is a family history of colorectal cancer. When you go for your wellness visit, talk with your health care provider about how often you should have a colonoscopy.

Breast cancer is diagnosed in women at a rate of one in eight.  According to the American Cancer Society, breast cancer is the second leading cause of cancer deaths in women. The disease also strikes men at a rate of one out of every thousand. While their numbers are far lower – 1,910 men were diagnosed in 2009 compared to more than 192,000 women for example – early detection and aggressive treatment are essential for all. Women should routinely conduct breast self-examinations and undergo mammograms. For both men and women, any changes in appearance or a steady pain in the breast tissue should be reported immediately to a health care professional. The ACS website devotes specific sections to symptoms and treatments for breast and other cancers.

The LHSFNA publishes health alerts on cancers and other diseases and also explains when Laborers and family members should get check-ups. These materials are available through the Fund’s online Publications Catalogue.