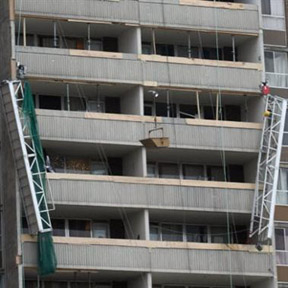 The December 24th deaths of four immigrant laborers in the collapse of a swing stage (suspended scaffold) unleashed a torrent of criticism in Ontario and has provoked a broad examination of the province’s safety and immigration laws.

In 2009, 21 construction workers were killed on the job in Ontario, yet, says LIUNA Canada Tri-Fund Director Cosmo Mannella, “The Christmas tragedy strikes a nerve because it exposes the failure of our laws to keep up with changes in the economy. The outcry isn’t going to settle down until reforms are made.”

After first rebuffing union calls for an independent investigator, Ontario Labour Minister Peter Fonseca announced on January 27 that he would create an expert advisory panel to conduct a comprehensive review of the province’s workplace health and safety prevention and enforcement system. In addition to the Ontario Federation of Labour, the LIUNA Tri-Funds will serve on the panel. A report will be issued in the fall.

The Christmas Eve deaths are reminiscent of the 1960 tunnel collapse at Hogg’s Hollow that killed four Italian labourers and led to the adoption of Ontario’s Occupational Health and Safety Act (OHSA).  “Like the deaths in 1960, the recent tragedy revives a lost focus on the dangers of construction work and the abuse that undocumented workers endure,” says Mannella. “I remember Christmas Eve. It was an awful day – no union worker would ever have gone onto a scaffold at the 13th floor under such conditions.”

In contrast to the United States where federal authority prevails, occupational health and safety is mostly a provincial matter in Canada. After adoption of the landmark act 50 years ago, provincial authorities let the law languish, making only one significant update to allow workers to refuse unsafe work. However, speaking to reporters after her husband’s death on Christmas Eve, Oksana Afanasenko summarized the problem for undocumented immigrants, saying, “[We] are fearful of telling the truth for fear of being deported.”

Taking advantage of this vulnerability, an underground economy mushroomed in recent decades as unscrupulous contractors across Canada hired thousands of undocumented immigrants, not as regular employees but, instead, as “independent contractors.” “Among the more lucrative businesses,” says Mannella, “is the restoration industry in which the four workers were employed.”

Working in small crews, restoration workers must be highly skilled to perform the variety of repairs required, yet, according to LIUNA Business Agent Frank Cassana, “They are grossly underpaid. This is highly skilled labour and dangerous work, and a lot of companies get around that by fudging work classification under the Workplace Safety and Insurance Board” (WSIB).

In its role as insurance provider, the WSIB is responsible for the compensation and prevention side of workplace safety, but enforcement of the OHSA is the responsibility of the Ministry of Labour. This separation prevents much correlation between safety inspections and safety improvements, and it also facilitates the efforts of unprincipled employers to circumvent classification requirements, avoid insurance obligations and pay substandard wages and benefits.

A lack of inspectors, including inspectors with construction backgrounds, is another problem. As few as one percent of all Ontario workplaces ever face inspection, leaving it to workers to bring complaints about unsafe conditions to regulators. As New Democratic Party Member of Provincial Parliament Cheri DiNova (Parkdale High Park) told a reporter for The Star, “The onus should never be on the worker. It’s not enforcement when only the victim is doing the enforcing.” Union leaders also pointed out that, despite passage of the Westray Bill in 2004 to allow criminal prosecutions for employer negligence or wrongful action in workplace accidents, the law has never been used by police or Crown Prosecutors.

The expert panel is likely to examine these criticisms. In addition, it will look into the issue of safety training. Quebec, for instance, requires 30 hours of construction training before a worker can go on a worksite, but, despite evidence of training’s impact, Ontario has no training requirement. Clive Thurston, President of the Ontario General Contractors Association which will also join the panel, says it is necessary to “rebuild the WSIB” and cites the need for mandatory training for both construction workers and construction supervisors.

Mannella and LIUNA – which has long been a leading proponent of immigration reform in Canada – are satisfied that the panel’s agenda includes the impact of the underground economy on workplace health and safety. “We need to put an end to this two-tiered system,” says Mannella. “Our nation depends on undocumented labor for so much of our work, but we fail to acknowledge and protect these workers. From LIUNA’s point of view, they’re all workers – there should be no distinction.”

Immigration is a federal issue, and LIUNA’s calls for reform, directed at Immigration Minister Jason Kenny, have met a deaf ear. Yet, estimates of undocumented workers in Canada run as high as 200,000. “Workplace safety and immigration policy are intertwined,” says Mannella. “We need reform on both fronts. If someone is prepared to work at the 13th floor on a day like that, then he has what it takes to have his papers put in order.”