By: Scott Schneider is the LHSFNA's Director of Occupational Safety and Health.

Those of us working to improve safety and health in the construction industry want to put our limited time and resources to best use. This is why we are celebrating the release of the fifth edition of the Chartbook from CPWR. 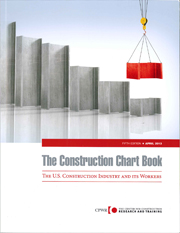 This treasure trove of data (updated through 2010) shows us clearly where we have made significant progress over the past decade and where big problems, in terms of health and safety, still exist. Each of the 55 sections of the book is full of interesting information to help inform our policy choices. Sections summarize the state of the construction industry (such as the amount of spending and new information on green construction), labor force characteristics (including unionization rates, age, minorities), employment and income (including wage differentials between union and non-union workers, health care and retirement plan coverage), education and training (such as apprenticeship) and occupational safety and health (as well as lifestyle issues like smoking prevalence) including OSHA enforcement.

Below are a few highlights from the safety and health section:

There is much to discover in this new edition. Download a free copy at http://www.cpwr.com/rp-chartbook.html and dive in. It will help us make an even bigger impact over the next few years until the next edition is released.