Laborers working at Ground Zero following the September 11, 2001, terrorist attack at the World Trade Center were exposed to all. Now, increasing numbers are ill. This makes the approaching ninth anniversary of the attack particularly significant.

September 13, 2010, is the last day to register for future workers’ compensation claims tied to rescue and clean-up work at Ground Zero. It is an extension of the original deadline of September 11, which, this year, falls on a Saturday. 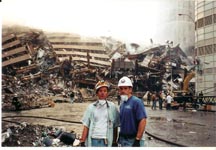 Many Laborers worked at the Ground Zero site.