As the Obama Administration’s August target date for adoption of health care reform rapidly approaches, the debate in Congress over cost and financing sometimes threatens to derail the entire effort. Yet, the political stakes for the President – who campaigned heavily on his pledge to ensure affordable care for all Americans – are so immense that failure seems an unacceptable option. Instead, the White House is mounting a full-court press even as the special interests intensify their push-back. 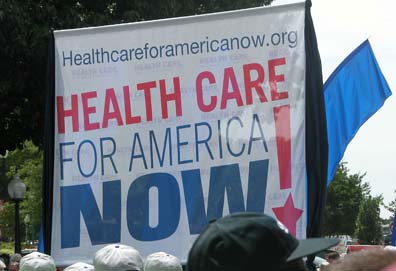 Unique among developed nations, the U.S. health care system is currently a private entity, with the government ensuring care only for the elderly and the very poor.  As a result, corporations with profit motives – insurance companies, pharmaceutical companies and hospitals – as well as doctors and their practice groups have a major financial stake in the shape of every reform proposition. In addition, if the government were to pick up the cost of broader or improved health care, taxpayers would be affected. Inevitably, “who pays” and “how much” has come to dominate the debate.

The focus on the financial side of the issue has obscured the goals of accessibility and quality of care that are the fundamental reasons to pursue reform. The focus on finances indicates that the effort is moving past acceptance-in-principle and into the realm of practical politics, but it is possible that the drive to deliver improved health care will be overwhelmed by conflicting opinions about its long-term financing.

For LIUNA and its signatory employers, certain aspects of the debate hit very close to home. The excellent health care benefits provided to LIUNA members and their families through the collective bargaining process are hard earned and any reform must recognize and reward our members, not penalize them. The first issue, therefore, is the overall cost of health care. As it rises relative to the cost of other goods and services in society, it pulls buying power its way. In effect, it squeezes the potential of Laborers to earn higher wages and of union contractors to make higher profits. As a result, holding down the rising cost of care should be, from a Laborer’s perspective, an important goal of health care reform.

In this regard, the fact that one in six (47 million) U.S. residents do not have health care coverage – and, therefore, seek care through the significantly more costly route of late-stage treatment in hospital emergency rooms – adds greatly to the overall cost of care. Universal coverage that encourages wellness and minimizes late-stage treatment would save the system a lot of money and enhance the nation’s overall health.

Avoiding unnecessary hospital emergency room care would also cut down on a competitive advantage now enjoyed by non-union construction companies that do not provide health coverage to their employees. As the system currently operates, hospitals pass along the cost of providing care to uninsured patients through higher rates charged to insurance plans – and, thus, to the union sector. In effect, LIUNA members subsidize health care for uninsured employees of non-union contractors.

Whatever the shape of the final plan, because it seeks to provide coverage for so many people who cannot now afford insurance, it could impose additional costs on the government, particularly over the next decade and beyond until the full benefits of wellness services begin to reduce cost pressures. Much of the current debate is over how these added costs will be covered.

To keep the cost of private insurance down, encourage that market and limit the need for government-provided coverage, the Obama Administration has proposed the so-called “public option,” the option of consumers to choose to purchase insurance through a government plan similar to Medicare. LIUNA and other advocates of this option say that private health insurance is unnecessarily expensive due to the insurance industry’s high administrative costs, national advertising and the need to sustain high profits for shareholders who, otherwise, might invest in other industries. Competition from a public option would demand improved efficiency from the insurance industry. Opponents of the public option assert that it is unfair to insurance companies and will lead to “socialist” national health care, as insurance companies are driven from the market. That, they say, would foster a government monopoly and, in order to deal with the rising cost of care, the eventual rationing of services by the government.

While the question of the public option is debated, the Obama Administration is seeking other ways to contain potential, added costs for the government. It has been negotiating with the hospital and pharmaceutical industries and has wrung substantial, but largely future commitments to cost reductions from them.

For Laborers, one financing option sparks strong self-interest – the issue of taxing health care benefits. Although proponents of this plan have said it would tax only “Cadillac” plans worth more than $17,000 per year (the average cost of family health care insurance in 2008 was $12,700), LIUNA and other unions see this tax as a crack in the door which could lead to broader applications in the future.

Although this tax garnered a lot of news when first seriously advanced last month, President Obama has not officially endorsed it, Congressional Democrats generally rejected it and it has since dropped down on the top list of funding alternatives.

Despite the President’s energetic efforts, given the complexity of the issues and interests involved, it seems likely that the vote on health care reform will not happen until the fall. It is even possible that a surge of industry-financed opposition could turn the tide against any reform at all, just like in the first years of the Clinton Administration.

It is certain that both sides in this debate will pull out all the stops, and the next few weeks will be decisive. The outcome is vital to the nation’s future. It is important to stay informed, track developments and let your elected officials know where you stand on the issue.