“These workers were infected from breathing spore-infused dust that was likely kicked up by weather and work activities such as excavation, paving and landscaping,” Sabitoni says. “Dust can be a problem at any construction site. Precautions must always be taken to keep it to a minimum.”

Valley fever is a fungal infection. The culprit, Coccidioides immitis, grows naturally in soil and thrives in warm weather when construction season is in high gear.

Valley fever annually kills more people than hantavirus, whooping cough and salmonella poisoning combined. Now, perhaps due to climate change, incidences of the disease are on the rise. More than 20,000 cases of valley fever were reported in the U.S. in 2011; 4,000 more than in 2010. Because valley fever is frequently misdiagnosed, it is likely that the real number is much larger. 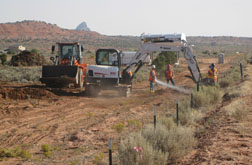 The Coccidioides fungus is native to the southwestern desert regions of the United States and Northern Mexico. It is prevalent in the semi-arid areas of California and Arizona where the majority of valley fever outbreaks have occurred. New Mexico, Nevada, Texas and Utah have also seen outbreaks. However, no part of the country is immune. Colorado, Louisiana, Missouri, Ohio, Michigan, Maryland, New Hampshire and Delaware have also reported incidents of valley fever. The Centers for Disease Control and Prevention (CDC) attributes these far-flung infections to traveling in parts of the country where the fungus is common and to rising global temperatures that are making more of the country hospitable to its establishment.

The recent rise in cases follows on nine of the warmest years on record occurring since the year 2000.

While most people who are exposed to Coccidioides immitis do not become sick, others develop a flu-like illness that can linger for months, become chronic and, if not treated, lead to pneumonia, meningitis and death. Symptoms may take weeks to develop. People who have weakened immune systems are particularly vulnerable as are those of African-American or Filipino descent, the elderly and pregnant women in their third trimester. However, everyone should be aware of valley fever’s symptoms. Prompt treatment at the first signs of illness saves lives.

Symptoms of valley fever include:

Symptoms of advanced valley fever include:

“A vaccine for valley fever is not available,” says Sabitoni. “Although soil disruptions are part of construction and make it difficult to avoid exposures to airborne dust, workers can reduce their risk with control measures such as wetting the dust and using N95 respirators. In addition, every worker should be aware of valley fever’s symptoms to assure prompt treatment.”