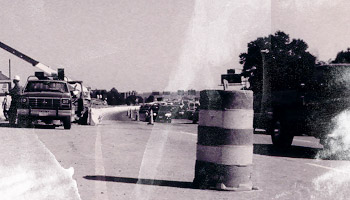 Each year, about 30 flaggers are killed are roadway work zones across the United States, most often due to the intruding crash of a car or truck that failed to slow or stop as it approached the worksite.

Flaggers – who, on union sites, are most often Laborers – are at the front line of defense for these mobile worksites. Their job is to stand at the boundary between the worksite and the traffic stream, alternately stopping then sending vehicles ahead in coordination with the flagger managing flow from the opposite direction.

The danger for flaggers comes from drivers who may be sleepy, drunk, speeding, inattentive or react too slowly to lane merger signals as they approach the worksite.

“Until now, the only protection for flaggers was warning signs and other traffic control devices to alert approaching drivers farther down the highway,” says Scott Schneider, the LHSFNA Occupational Safety and Health Director. “Obviously, given these deaths, warning signs don’t always work. Now, the Federal Highway Administration (FHWA) has opened a new chapter in roadway safety for flaggers.”

On December 1, 2004, the FHWA approved the use of three particular automated flagger assistance devices, the J-4 Flagger Workstation, the Autoflagger and the R. C. Flagman (Flagman).

The idea behind the devices is to physically separate the flagger from the stop/slow sign that actually directs traffic. Getting the flagger away from the front line of traffic greatly reduces the risk of serious injury or death due to driver error.

“This is a good example of an engineering control,” say Schneider. “The danger is engineered out of the situation through the design of the device, itself.”

In this case, because the flagger – by means of a cable or radio-operated connection – operates the signal device from a distance, he or she is removed from the high crash danger zone at the edge of the site.

An added advantage of the automated devices is their improved visibility relative to the hand-held stop/slow paddles that are commonly used to manage traffic flow. Due to their mechanized nature, it is possible to mount a larger, lighted sign at a greater height, thus improving the likelihood that drivers will notice and adjust their approach.

Though all of the newly approved automated flagger devices were developed by individuals with a close interest in improved highway safety, the J-4 comes from a different perspective than the other two. The J-4 was developed by Rick Heinz, a LIUNA Local 477 member and himself a flagger, and was tested in cooperation with the Illinois Department of Transportation.

“We don’t want to eliminate the flagger’s job,” says Heinz, who clearly comes at safety mainly from a worker’s point of view. Each J-4 is operated by its own flagger who uses a remote control connected to the workstation by a 25-foot cable. One J-4 is stationed at each end of the work zone.

The Autoflagger was developed by Chuck Fanslow of Safety Technologies in Red Wing, Minnesota, and was tested by the Minnesota Department of Transportation. In contrast to the J-4, “with the Autoflagger system, a single operator is positioned in the center of the work zone,” says Fanslow, “and operates an Autoflagger at each end through a radio control.” In its marketing documents, his company clearly promotes management’s interest in eliminating one flagger position from its work crews.

The Flagman – developed by civil engineer Peter Vieveen, the owner of R. C. Flagman, Inc. of Welland, Ontario – also touts potential savings from eliminating flagger jobs. This system can be operated by two flaggers (one at each end of the work zone, each controlling one device) or by a single flagger (standing at one end, directly controlling one device and managing the other by radio control).

In Canada, where the Flagman has been in use for more than 11 years, some Road Authorities allow the use of automated flagging devices with no flaggers present. Thus, a fully-automated, programmed device is available for sale in Canada, but it cannot be sold in the U.S. where a human operator is required.

With the help of their respective departments of transportation, all devices have been extensively field tested in all kinds of weather and terrain. The FHWA’s interim approval for nationwide use requires state DOTs to maintain records of their use so that they can be further evaluated.

The Autoflagger has a 36-inch sign mounted 13.5 feet above the ground. The J-4’s sign is 24 inches (a 36-incher is in development) and 13 feet high. The Flagman uses lights instead of the traditional slow/stop sign. Mounted at a height of 12 feet, a steady red light stops traffic or a flashing amber allows its flow. In coordination with the lights, a gate lowers or lifts to block or open the traffic lane.

The Autoflaggers are each built on two-wheel trailers that can be hitched together and towed by a single truck. Each weighs 1,340 pounds. The Flagman also is designed to be towed in tandem. The lighter J-4s are transported on a truck bed but can be wheeled around the site by hand. Retractable outriggers lock the J-4 in place during use.

One of the concerns with automated flagging devices is the possibility that drivers might be less responsive to a mechanical device without an obvious operator. However, road tests indicate that drivers respond well to the automated system. In hundreds of tests in Illinois, only two drivers stopped in the wrong place. Similarly, in Minnesota, a survey of drivers who passed through an Autoflagger-controlled work zone found that 85 percent had no confusion at all and 83 percent felt the state should continue use of automated systems.

“One study showed,” says Fanslow, “that we got slightly better compliance from drivers with the Autoflagger than with manual flagging. The elderly loved it. It was visible from a greater distance and less confusing up close.”

Another concern is durability. All equipment on construction sites is subject to rough handling, and the danger of collision with passing trucks and cars is obviously significant. All three companies stress the quality of their workmanship and the strength of the materials and coatings used in their devices. In addition, the J-4, which was designed to endure minimal damage if hit by a vehicle, has been videoed performing well in crash tests with an automobile.

More information about the Autoflagger is available from Safety Technologies or 888-FLAGGER. Information on the J-4 can be found at Endless Visions or at 217-322-3757. The Flagman is presented at the Flagman site or at 877-352-4626.