Gayla Benefield will die of tremolite asbestosis. So will her husband. Both her parents died the same way. Luckily, so far, none of her five children has been diagnosed.

“When my mother died,” she recalls, “my granddaughter was old enough to take note. After all, everyone in this town knows the danger. She said, ‘Grandma, am I going to die of that, too?’ I couldn’t honestly say no.”

In Libby, four living generations are threatened, and several others are already dead. 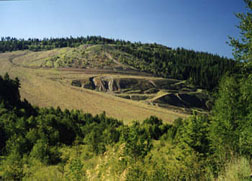 Today, Grace & Co.’s vermiculite mine above Libby is closed. At one time, it provided 80 percent of the world’s vermiculite.

And the trail leads out from Libby to hundreds of processing and manufacturing plants across North America where vermiculate from the W.R. Grace & Co. mine was used to make insulation and gardening materials. A higher than average incidence of asbestosis actually follows the path of the train tracks from Libby to the processing facilities. And 35 million homes remain packed with insulation made from Libby’s mine.

Several distinct, microscopic fibers make up the family of asbestos minerals that occur naturally in the earth’s crust. The most common is chrysotile asbestos which was mined for commercial use in the U.S. and Canada for much of the 20th century. Less common is tremolite asbestos which was never mined for its own use but contaminated the vermiculite ore that was mined in Libby. That mine produced 80 percent of the world’s vermiculite. 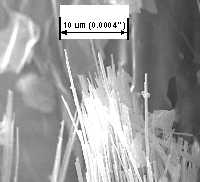 Like silica and other microscopic minerals, asbestos fibers lodge in the lungs, causing scarring that builds over time until breathing is disrupted. The disease is known as asbestosis. It is incurable and terminal. However, it commonly has a latency period (the time between the initiating event and the actual development of the disease) of at least 20 years.

Because it is much finer (500 times finer) than its chrysotile cousin, tremolite asbestos also passes through the tissue of the lung, lodging in the outer lining (pleura) that encases the lungs. The pleura become thick and leathery and loses their elasticity. This induces a cancer called mesothelioma. The cancer spreads into the lymph nodes and causes autoimmune disorders. Victims sometimes die from suffocation due to fluid build-up around the lungs and sometimes from infections that their bodies no longer effectively fight.

Speaking by phone to a reporter 3000 miles away, Benefield says, “You probably occasionally see someone at the store in your area with an oxygen mask and attached tank. Around this small town, it’s a common sight. We’ve got 1100 diagnosed patients here.” 7500 people live in Libby and Lincoln county.

Yet, the town, whose economy – especially, since the mine closed – relies on tourism, remains divided. “Of course, Grace always denied there was a problem,” says Benefield who was a dispatcher for the LIUNA local union, “and Grace owned the town’s radio station. Anaconda Copper owned the weekly paper. I didn’t know. None of us did. When they built the Libby dam, I sent Laborers up there by the mine all the time. I think there was only two fatalities on the dam’s construction, but now, 30 years later, these men are dying from asbestosis.

“Even after the mine closed in 1990, the business community didn’t want to admit we had a problem,” Benefield continues. “It was so bad, the sick tried not to go out for fear they or their family would be shunned. If a man died, and his wife said, ‘Oh, he worked up at the mine,’ folks would nod their heads. At least, we thought, by risking his life and working there, he took care of his wife and children. We didn’t’ know it was in the air and killing all of us. A nurse worked at the high school for 25 years and stuck to the ‘company line’ the whole time. Then, she had a screening and died 90 days later. Mesothelioma. Even today, some people just don’t want to talk about it.”

Benefield is the founder of the Lincoln County Asbestos Victims’ Relief Organization through which she continues to press for compensation for the families. “We’re not so angry, anymore,” she says. “The story is out. Now, we’re focused on helping the victims. They need medical care and funeral expenses. There’s no cure, so wellness care – avoiding a triggering infection – is the best we can offer.”

Benefield was one of the first to sue Grace, on behalf of her mother whose life might have been saved had the company installed a change room so that her father, a miner, would not have brought the asbestos home on his clothes. Offered a chance to settle out of court for twice as much, she insisted on pursuing a guilty verdict and won $250,000 in 1998.

So long as Grace remains in bankruptcy, the Grace Medical Plan will support Benefield’s Libby clinic. That would change if Congress establishes an asbestos compensation trust fund. Then, the trust fund will assume Grace’s liability, and Grace can restore its business operations without further responsibility to its victims in Libby and around the U.S. and Canada. “We’re not getting much on our judgments, anyway,” says Benefield, “so a compensation trust might be a good idea. But the plans so far considered in Congress would be a disaster for us in Libby.”

That is because tremolite-associated asbestosis is a tiny portion of the asbestosis problem in the U.S. and, in the bigger picture, mesothelioma is a rare disease. “The criteria used in the legislation to qualify victims for compensation is designed to qualify those with [the much more common] chrysotile asbestosis. We reviewed 125 cases here, and 78 percent did not meet the medical qualification. Our people would be cut out of the trust fund and dropped by Grace at the same time.”