“Giving workplace fatalities a face” is the goal of the year-old website United Support & Memorial For Workplace Fatalities (USMWF). The effort has struck a chord.

The site is sponsored by a non-profit of the same name that was founded by Tammy Miser in 2004, a year after her brother’s death in an aluminum dust explosion at an automobile manufacturing plant in Indiana. 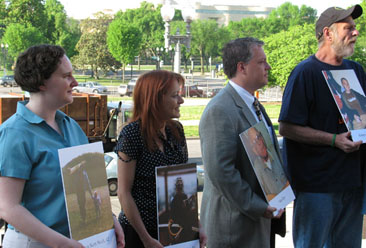 Miser, second from left, holds a photo of a lost worker at the Workers’ Memorial Day rally at the U.S. Department of Labor.

According to Miser, her brother had just relit a furnace that had gone out. “Shawn and two co-workers decided to stick around to make sure everything was okay. Shawn’s back was towards the furnace. Some say he got up and started walking to the door (after a first blast), but a second blast occurred. He did not die instantly. He lied [sic] on the floor while aluminum dust burned through his skin and muscle tissue. It burnt his internal organs and took his eyesight. He was still conscious and asking for help. The company never bothered to call the family to let us know he was injured or [that] there had been an explosion. We got a call from a friend. Shawn had no body hair or physical markings that would identify him. The doctors said his internal organs were burned [beyond] repair and that was apparent by the black sludge they were pumping out of his body. [Our family took] him off life support and we watched my brother die before our very eyes. We watched him take his last breath. His last words were, ‘I am in a world of hurt.’”

The tragedy could have been prevented. “[Combustible aluminum dust fires] had happened at the plant before,” Miser recounts, “and the workers were told not to call the fire department because they were worried about OSHA. The company had let the fires burn out (in the past). The fire extinguishers the company had were not rated to handle those fires and some were not fully filled. The company eventually shut down.”

From her own experience, Miser learned about both the impotency and callousness of OSHA as it functioned during the Bush Administration. As a relative of a victim, she had no standing to contribute to OSHA’s investigative work, nor to speak to its enforcement decisions. Yet, victims had often spoken to their relatives about conditions at the workplace as well as the outlook and response of management to identified hazards. Moreover, the input of family members could inform authorities – as is now done at sentencing in criminal trials – as to the full impact of company negligence.

“Not surprisingly,” says the new website, “families too often find little support from government officials when they inquire into how the workplace incident occurred. In spite of their loss and overwhelming frustration with the investigative system, family members are banding together to advocate for safer and healthier work environments. These family members are committed to calling attention to occupational dangers not only to honor their loved ones, but also to prevent other families from experiencing the pain and confusion associated with workplace injury, illness and death.”

Miser gives a lot of credit for her successful advocacy to Jordan Barab who supported her after her brother’s death and was recently appointed to his new position as Deputy Assistant Secretary and currently serves as OSHA’s acting director.  “He pushed me. I hate politics, but he pushed me to get involved. He’s been so supportive of the families and he got the ball rolling. Now, at OSHA, there seems to be more of a focus on people. Families are becoming more vocal and are bringing these important issues back to light. I knew I had to do (60 Minutes) and that I couldn’t say no. Now these (offending) companies are scared of us. They’re petrified.”

The USMWF operates on a $160,000 grant from the Public Works Foundation. Raising more money to expand advocacy is an important objective.

Yet, the power of the organization’s advocacy is its personal dimension. The website offers support to family members and provides a place for them to post personal tributes to their lost ones. As Brenda Rea writes on the site,“This website has helped me deal with the loss of my husband. Brian was killed Jan 30th at Sony DADC in Terre Haute, Indiana. He was only 32. The children and I are having a rough time accepting, but I’m finding support. Thank you.”