Hearings begin this month on OSHA’s proposal to bring its 30-year-old Hazard Communications standard (1910.1200; 1928.59 in construction) in line with modern norms of worker protection and global commerce.

The purpose of this standard is to prevent illness and injuries by informing workers who use hazardous chemicals of the dangers they face, the precautions they should take and what to do if a dangerous exposure occurs,” says LIUNA General Secretary Treasurer and LHSFNA Labor Co-Chairman Armand E. Sabitoni, noting that Laborers encounter these hazards in exposures to concrete, asphalt, concrete release agents, paints and welding fumes. “In today’s global economy, with chemicals manufactured and shipped for use all over the world, consistent, effective hazard communication is absolutely vital.”

Developed during the waning days of the Carter Administration, the HazCom standard originally proposed warning labels on all hazardous materials containers. However, when adopted during the Reagan Administration, the standard’s label requirement was de-emphasized in favor of Material Safety Data Sheets (MSDSs) that need to be retained by management for office review by workers who ask to see them. MSDSs were designed and written for engineers, not workers. Although the required information is standard, no format is designated, and chemical manufacturers are allowed to add any additional information they think helpful to understanding the risks. Sometimes, the “helpful” information actually downplays the chemical’s potential danger. For all these reasons, industrial hygiene professionals and unions have long criticized the MSDS system. 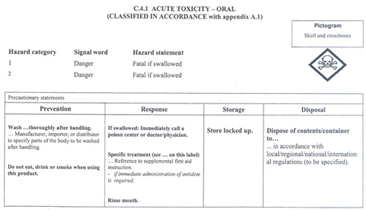 Meanwhile, in Europe and elsewhere, governments not only embraced the on-the-container label requirement, they improved it with a variety of specific format and message requirements. Known as the Globally Harmonized System (GHS), this enhanced hazard communication system has been adopted by the United Nations Conference on the Environment and Development and is now required for all chemicals manufactured in or imported into Europe, Canada and many other nations. By adopting the GHS, the U.S. will improve worker safety and assist U.S. chemical manufacturers that compete in the global market.

The GHS label requirement will not eliminate MSDSs, but their name will change to Safety Data Sheets (SDSs). Both the labels and the SDSs will have a designated format that includes a standardized signal word, a pictogram and a hazard statement for each class and category of chemical. The pictogram is particularly important due to increasing literacy and fluency issues in global production. In addition, labels and SDSs will carry a precautionary statement and contact information for the manufacturer or importer.

Governments may choose to allow additional safety information on the SDSs, and a debate has erupted over OSHA’s intention to remove threshold limit values (TLVs) while retaining permissible exposure limits (PELs).

PELs do not establish safe limits, just permissible limits. They are criticized as “limits the chemical industry can live with,” that is, limits that do not impose undue expense on manufacturers. TLVs – developed by the American Conference of Government Industrial Hygienists (ACGIH) – as well as limits developed by NIOSH and other nations’ regulatory agencies are meant to indicate maximum safe exposures. In total, about 1,800 chemicals have some kind of exposure limit (see the ACGIH’s Guide to Occupational Exposure Limits). 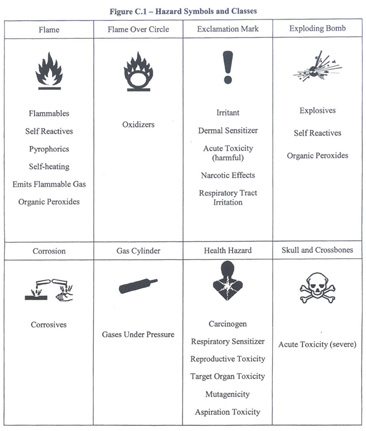 Pictograms required on MDSs and labels. Click here to enlarge.

Today’s PELs were set in 1971 (when OSHA was established) by adopting the TLVs that ACGIH had thus far established. In 1983, when the HazCom standard was first devised, the PELs were incorporated into it. While ACGIH continues to devise new TLVs and update old ones, due to legal obstacles involved in updating any standard, only a handful of PELs have been revised.

Thus, for the most part, OSHA’s PELs are 40 years out-of-date, and its proposal to require them on the new safety data sheets while banishing today’s TLVs is a step backward in the agency’s otherwise positive decision to embrace GHS warnings. Many unions [Building Construction Trades Department, Steelworkers, Teamsters] and OSH professionals have urged OSHA to drop PELs entirely and require the TLVs or better, to include both limits as well as those developed by NIOSH and other groups. By listing differing limits, the SDSs would indicate that all limits are estimates of safety; opinions and situations differ, so caution on the part of users is well-warranted.

With more than 160,000 chemicals listed on the Registry of Toxic Effects of Chemical Substances, tens of thousands have no known safe exposure limit. This is because worker safety evaluations – such as those with pharmaceuticals – are not required before a chemical is put on the market. Hundreds of new chemicals enter the market each year, and test programs cannot keep up. To address this problem, Europe employs control banding and a registration program known as REACH.

Control banding works by assuming that new chemicals which have content or characteristics similar to known hazardous chemicals are equally dangerous. New chemicals are “banded” with their presumed cohort and must meet the same GHS requirements.  The REACH program imposes duties on manufacturers and importers to register dangerous chemicals and seek less dangerous alternatives.

Although not part of OSHA’s present proposal to upgrade its Hazard Communications standard, these more advanced systems may be pursued in the future. Indeed, while supporting the proposed revision of the standard, the American Society of Safety Engineers (ASSE) expressed disappointment with OSHA for failing to address control banding now.

“We’re happy that OSHA is getting back to standards development,” says Sabitoni, referring to the agency’s new regulatory agenda. “Despite the outstanding issues and controversy with this standard, after all the work that has been done in Europe, it should advance relatively easily. We expect it to be in place by 2012.”

Testimony on the proposed standard will take place at hearings in Washington (March 2), Pittsburgh (March 31) and Los Angeles (April 13).

For LIUNA members and signatory employers concerned with chemical risks, the LHSFNA publishes Toxics, a pocket guide to 33 common chemicals found on hazardous waste sites. It is available through the online catalogue.