Help in Finding a Healthy Diet

Failing at New Year’s Resolutions is almost as much of a tradition as making them, and by now many people have given up on theirs. But if yours was to find a healthy diet and weight loss program that’s easy to stick with, you don’t have to be among them. And it’s never been more important to make this change. Obesity, which increases risk for a number of serious conditions including heart disease and diabetes, is a growing problem in the U.S. and Canada. In the U.S. alone, nearly four in 10 adults are obese.

While marketers would like you to believe otherwise, you don’t need to eat special meal replacements like shakes and nutrition bars or go days where your primary food is watermelon or cabbage. These fad diets are all but guaranteed to fail because the eating patterns aren’t permanent. They’re also not good for you because they limit the intake of nutrients necessary for optimal health.

According to U.S. News & World Report, which annually ranks popular diets, you can find everything you need for good health and weight loss by shopping the perimeter of your grocery store. That’s where you’ll find the fresh fruits and vegetables, lean meats, fish, low-fat dairy products and other nutrient-dense foods that make up the DASH and Mediterranean diets, which tied for first place.

The diets were ranked by a panel of nutritionists, dietary consultants and physicians based on categories including:

Here’s a look at the winners:

What Is the DASH Diet?

Featuring high fiber, low fat foods that are full of potassium, calcium and magnesium, the DASH diet can lower blood pressure and often reduce the need for medication. It’s also been found to reduce risk of other serious conditions including certain cancers, diabetes and osteoporosis.

What Is the Mediterranean Diet?

The DASH diet is a structured eating plan. People are told exactly how many daily servings they should eat from the recommended food groups for optimum health. For example, four to five daily servings of vegetables and fruit and two or fewer daily servings of meat, poultry or fish. 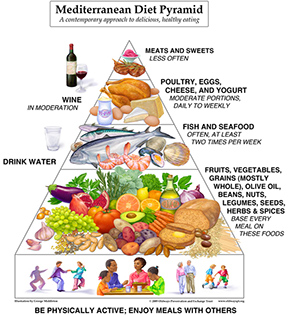 In addition, the DASH diet follows American dietary sodium guidelines: less than 2,300 milligrams (mg) of sodium (about a teaspoon of salt) up to age 51. After age 51 – sooner for African Americans – the recommendation is no more than 1,500 mg of sodium (about half a teaspoon). Most Americans consume more than double the amount of their daily recommended sodium intake.

The Mediterranean diet is a flexible approach to eating. Instead of daily servings, it promotes eating patterns with a food pyramid. Vegetables, fruits, grains, nuts and vegetable oils make up the bulk of every meal but amounts aren’t specified. Fish is recommended twice a week. Poultry and dairy should be eaten in moderation. Meat should be consumed “less often.”

Which Diet Is Best for You?

It depends. But regardless of whether you choose the DASH, Mediterranean or any other diet, it’s important to focus on foods that nourish your body, that you like and that you’re willing to eat long-term. Doing so will improve your health, help you lose excess pounds and help you maintain a healthy weight.

”There is an established theme of what is considered healthy eating, but no single diet is the best for all of us,” said panelist Dr. David Katz, director of the Yale University Prevention Research Center. “Ultimately, a ’best’ diet is one that can be adopted, managed and sustained over time.”

The complete list of the 40 ranked diets is available here.

The LHSFNA’s Health Promotion Division has developed a number of materials that can help Laborers learn eating habits that improve diet and overall health. These include the Nutrition & Fitness for Laborers series and the High Blood Pressure and Diabetes Health Alerts. For more information, call 202-628-5465. Additional materials on nutrition, diet and general wellness can be ordered through our online Publications Catalogue.

If you’ve ever hit your finger with a hammer when you intended to pound ...

How Food Affects Your Mood

Have you ever experienced the energy highs and lows that come with eatin...

Eating Well While on the Road

Whether it’s a family vacation or traveling for work, at some point we a...

Should You Be Drinking All That Coffee and…

There’s no doubt that Americans love their coffee and tea. About 64 perc...

Jumpstart Your Day: Drink a Glass of Water

Do you ever feel like you’re not up to par? Maybe you’ve got a bit of he...

Is Your Sandwich Harming Your Health?

Did you eat a sandwich today? If so, you probably consumed way more sodi...

Heart disease is the number one killer in the United States, but in New ...