In Tribute to Dr. James Melius

On January 1, LIUNA, the LHSFNA and the entire labor movement lost a dear friend and a constant ally in the fight for worker safety and health. Dr. James Melius, known more simply as “Dr. Jim” to many of us, passed away due to cardiac arrest in his hometown of Copake Falls, New York at the age of 69. Dr. Melius served the men and women of LIUNA for almost 25 years, and at the time of his passing was the Director of Research here at the LHSFNA and the Administrator of the New York State TriFunds. He held a wide range of other leadership and advisory positions and was a nationally recognized and respected voice in the field of occupational safety and health.

The loss of Dr. Melius has been felt strongly by those within LIUNA and here at the LHSFNA. General President Terry O’Sullivan noted that Dr. Melius worked closely with LIUNA General Secretary-Treasurer and New England Regional Manager Armand E. Sabitoni as well as LIUNA Vice President and Eastern Regional Manager Raymond M. Pocino. “Armand, Ray and I have lost a dear friend and devoted colleague,” said O’Sullivan. “Jim was a true working class warrior who valued hard work and those that do it, and who knew that working men and women are our nation’s greatest assets. He will be sorely missed by all who were fortunate enough to have known and worked with him.”

Dr. Melius is perhaps best known for being an integral part of the passage of the James Zadroga 9/11 Health and Compensation Act, the federal law that established medical monitoring and health care services for first responders, volunteers and survivors of the 9/11 terror attacks. In the years following 9/11, Dr. Melius chaired the Steering Committee for the World Trade Center Medical Monitoring and Treatment Program. This involvement informed the testimony he gave to Congress in 2009, which detailed the difficulties first responders and others were having in getting their medical problems addressed.

“The failure of the government to properly inform and protect these people from these exposures added substantially to their health risks,” Dr. Melius testified in 2009. “There is no doubt that these disorders and others … are due to the toxic exposures and psychological trauma related to 9/11. These are not rare isolated medical conditions found in a small number of those exposed.” Dr. Melius was also instrumental in the 2015 reauthorization of the Zadroga Act, which extended the World Trade Center Health program and Victim Compensation Funds for 75 years. 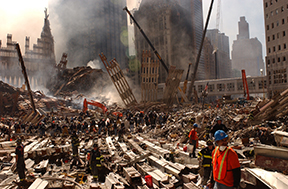 Many LIUNA members took part in the cleanup efforts in the weeks and months after the 9/11 attacks, and today more than 70,000 people, including over 4,000 Laborers, are eligible to receive treatment and other compensation from being exposed to contaminants that are known to cause cancers, respiratory diseases and other illnesses.

Dr. Melius’ impact was felt much more widely than New York, however. A tireless advocate for workplace safety and health, Jim also played a key role in establishing paid medical exams and compensation for thousands of Department of Energy workers – many of whom were LIUNA members – who were exposed to dangerous levels of radiation and beryllium at U.S. nuclear sites. And when the federal government failed to issue these benefits in a timely fashion, Dr. Melius continued to fight for the care and compensation workers deserved.

Within LIUNA, Dr. Melius is also credited with helping to obtain substantial grant funding that allowed LIUNA to create new training programs related to hazardous waste, infectious diseases and disaster response. At a time when others were looking to OSHA and NIOSH for grant funding, Jim’s forward thinking led LIUNA to the National Institute of Environmental Health Sciences. The curriculum that came out of those grants allowed thousands of LIUNA members to receive much needed safety and health training.

Whenever LIUNA’s members needed him, Jim was up to the challenge. He was the driving force behind finalizing the Silica/Asphalt Milling Machine Partnership, which in the span of a few years led the entire industry to adopt controls that reduced worker exposures to harmful asphalt fumes and silica during road work. Dr. Melius was not done protecting workers from the harmful effects of silica, however. Speaking before OSHA in 2014 about its proposed silica rule, he urged the inclusion of medical surveillance and laid out how it could be achieved while still ensuring the confidentiality of workers’ medical information. Medical surveillance requirements, including provisions to protect workers’ medical records, were included in OSHA’s final silica rule in 2016.

To those who knew him well, Jim’s dedication to the health and safety of working people came as no surprise. The son of working class parents, his father was a farmer and his mother was a first-grade teacher. He graduated first from Brown University and then from the University of Illinois School of Medicine before receiving his doctorate from the University of Illinois School of Public Health. It didn’t take long to find his niche as an advocate for worker health. Before joining the New York State Laborers’, Dr. Melius safeguarded worker health at the National Institute of Occupational Safety and Health (NIOSH) and the Center to Protect Workers’ Rights.

“I was still early in my occupational health and safety career when I first met Jim,” said Walter Jones, Director of the LHSFNA’s OSH Division. “He always let the science lead the way, and I learned a lot from that practical approach. When Jim spoke, people listened, because they knew he had the evidence to back it up.” 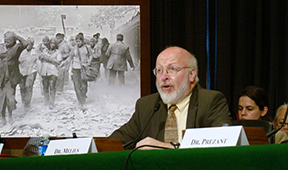 In an obituary for Dr. Melius published in the New York Times, Richard Duffy, a former official with the International Association of Fire Fighters, talked about how Dr. Melius handled NIOSH’s response after a 1980 explosion and fire at a hazardous chemical storage site in New Jersey. “He flew in and got NIOSH a trailer to do medical evaluations of the firefighters,” said Duffy. “It was one of the first times that firefighters were evaluated after a major incident, and that continues today.” In the same piece, Dr. Philip J. Landrigan, a longtime colleague who collaborated with Dr. Melius on the 9/11 medical program, had this to say about Jim’s impact on worker safety and health: “I think it’s fair to say that Jim Melius was the senior medical officer in the entire American labor movement.”

Jim is survived by his wife, Melanie, and two sons, Jeremy and Ehren. A memorial service is being planned for Monday, March 26, 2018 at Mount Sinai Hospital in New York City.

Jim will be deeply missed by everyone here at the Fund. We will remember him as a good friend, a respected colleague and a man who devoted his life to helping working people and others in need. When workers were sick and in need of a voice, there was no better advocate than Dr. Jim Melius.

Short safety toolbox talks, usually given at the beginning of the workda...