Watch and Listen to Real Stories from Real People

Fruits and Vegetables Are Extra Beneficial for Current and Former Smokers

According to a recent study, “each additional serving of fruits and vegetables that smokers and former smokers eat [each day] is associated with a four to eight percent lower risk of their developing COPD.”

Researchers cited the antioxidants in fruits and vegetables as a reason for this association, suggesting antioxidants may be able to counter the harmful effects of smoking. Our recommendation: take extra precautions and protect yourself from COPD by quitting smoking and eating at least 2 cups of fruit a day* and 2 ½ cups of vegetables a day.

The harmful effects of smoking cigarettes do not discriminate across race, ethnicity, gender, sexual orientation, socioeconomic or military status. Discussed in detail last month, the LHSFNA recently developed a partnership with the CDC Tips™ From Former Smokers Campaign, a nationwide tobacco education campaign that raises awareness of the health issues caused by, associated with or made worse by smoking or exposure to secondhand smoke.

The Tips™ campaign profiles real people and their experiences with smoking. Many of these people have worked in the service industry and their compelling stories are highlighted below. Click here to watch more people who may be just like you talk about their struggles with smoking or exposure to secondhand smoke and how it changed their lives and the lives of their families.

“Do your heart a favor and quit now.” Roosevelt is a former commercial plumber who had to give up his career after he suffered a heart attack and his heart was no longer strong enough to meet the demands of the job. But the negative impact on his life didn’t stop there; Roosevelt also had to stop playing basketball with his kids.

“Just cutting down on cigarettes isn’t enough.” Kristy unsuccessfully tried using e-cigarettes as a method to help her quit smoking, but she still smoked regular cigarettes. Her smoking habit came to a halt when her lung collapsed and she experienced the beginning stages of COPD and emphysema, all while in her 30s.

Nathan: Used to Work in Casinos

“When you smoke, it affects more than just your health.” Nathan had never smoked a day in his life, but worked at a casino – a facility where it was still legal to smoke indoors. Nathan experienced asthma attacks and colds that would linger. Not all damage is visible to the naked eye – his doctor thought he was a heavy smoker based on the severe lung damage seen in a chest x-ray. He passed away when he was only 54 years old. 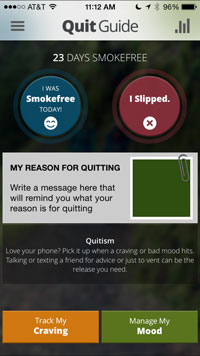 Last month, we promoted the quitline for smokers to speak with a smoking cessation expert and this month, we’re promoting another free resource for smokers: the QuitGuide mobile app. This free app, a product of https://smokefree.gov/, is available in the Apple App Store and on Google Play.

The QuitGuide app helps you track and better understand your smoking patterns, including your cravings, moods and triggers. In addition to sending motivational tips and messages, the app also helps build the skills you need to quit smoking for good – like finding your reason for quitting and how to overcome obstacles.

Use the QuitGuide app to log your journey daily and monitor your progress while bouncing back from setbacks and celebrating your successes.

Help is here. The LHSFNA’s Smoking Cessation Program for Laborers and Smoking: Facts and Quitting Tips pamphlets offer suggestions and tips for breaking the tobacco habit. Order them through the Fund’s Publications Catalogue or call 202-628-5465.