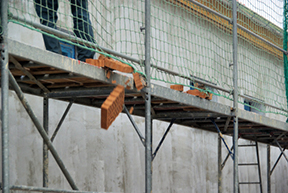 Incidents with the potential to cause serious injuries are common at construction sites, but if no one gets hurt, you’re less likely to hear about them. But just because an employee didn’t fall after tripping over an extension cord or wasn’t hit by a falling hammer doesn’t mean these types of close calls or near misses should go unreported. Employers can improve safety in their workplace by implementing a program that encourages workers to speak up when a close call occurs. Otherwise, an employee who walks away unharmed or witnesses a co-worker narrowly escape injury may not realize the importance of documenting the incident or may not feel comfortable reporting it.

“Saying something about a close call could potentially save the life of a fellow LIUNA member or a worker from another trade,” says LIUNA General President Terry O’Sullivan. “Empowering workers to speak up is one of the most important things contractors can do to create a safe and healthy workplace and a positive safety culture.”

Why Report a Close Call?

Any incident where a worker could have gotten hurt but didn’t is a red flag. It’s what safety professionals refer to as a leading indicator because it calls attention to a hazardous situation before an injury results. Many times the difference between a close call and a critical injury is a split second or a fraction of an inch. According to the National Safety Council, 75 percent of all accidents are preceded by at least one close call.

Why Close Calls Don’t Get Reported

Health and safety professionals say there are a number of reasons why employees don’t always report close calls. They include: 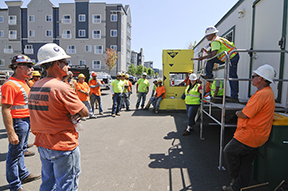 To be proactive and create a positive safety culture, employers must encourage employees to report close calls by:

The LHSFNA has developed a number of materials that can help spread the message about the importance of reporting close calls. These include the Speak Up for Safety and Safety’s Not Complicated posters. These and other health and safety materials can be ordered through our online Publications Catalogue. The LHSFNA’s Occupational Safety and Health Division can also offer guidance on keeping your worksite site safe by coming out for an onsite visit. For more information, call 202-628-5465.

Workers’ Memorial Day in the United States and Canada’s National Day of Mourning, both held annually on April 28, honor workers who have died from injuries suffered on the job. It’s also a day to collectively acknowledge the pain and hardship these preventable deaths inflict on families and communities and call attention to the continuing fight for improved worker safety and health. On this day, many construction sites and other workplaces throughout the U.S. and Canada will pause for a moment of silence. Candlelight vigils will be held in some communities. 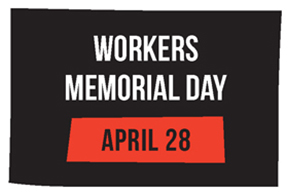 No one should die from going to work, but over 5,000 workers did in 2016, and almost 1,000 of them were construction workers. Sadly, these figures don’t even tell the whole story because they don’t include workers who died from health hazards. Silicosis and other illnesses linked to occupational exposures can take years to develop and may not appear until after retirement. There’s also the toll that nearly 3,000,000 nonfatal injuries took on workers in 2016.

Job-related injuries and illnesses like these stand as a reminder of the LHSFNA’s mission to improve workplace safety and health. Every worker should be as healthy at the end of their shift and the end of their career as they were at the beginning.