CDC: Nearly Half of U.S. Deaths Can Be Prevented

Every year in the United States, one of the wealthiest countries in the world, nearly 900,000 Americans die before their time. According to a new report from the Centers for Disease Control and Prevention (CDC), nearly all of these premature deaths (dying before age 80) are linked to lifestyle. That means most of these instances of lives being cut short are preventable. 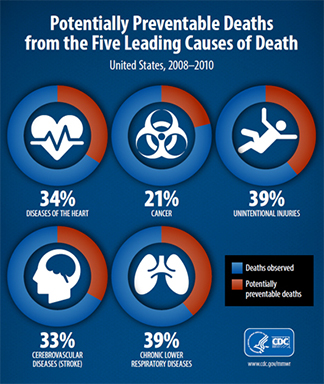 Heart disease, cancer, chronic lower respiratory disease, stroke and unintentional injuries are what most people die from in the U S. In 2010, these five causes were the source of 63 percent of all deaths in the U.S. In the majority of these deaths, CDC researchers found that smoking, alcohol consumption, poor diet and lack of exercise were factors. They also found that up to 40 percent of annual deaths from these leading causes can be prevented if people quit their tobacco habits, reduce or quit drinking alcohol, eat healthier and step up physical activity. Monitoring chronic health conditions such as high blood pressure and type 2 diabetes, and taking prescribed medication as directed, is also crucial to bringing down the number of annual premature deaths.

“The good news is that things people can change…make a difference,” said CDC Director Tom Frieden, MD, MPH, during a recent news conference to announce the research findings.

Indicative of the role that economics and culture can play in health, the CDC found that residents of Alabama, Florida, Georgia, Kentucky, Mississippi, North Carolina, South Carolina and Tennessee are 28-33 percent more likely to die from a preventable condition than if they lived elsewhere in the U.S. Not coincidentally, these states have high smoking and obesity rates, low physical activity rates and fewer programs for monitoring chronic health conditions.

“There are far too many places in this country where just by the unfortunate fact that you live in a place you’re much more likely to die from a preventable cause,” said Frieden. “You don’t have to move geographically, but we do have to move in terms of policies and programs.”

Each of the top causes of death has specific risk factors that can be reduced with changes in lifestyle and by addressing chronic health issues: