This June’s horrific traffic accident that left comedian Tracy Morgan severely injured should be a wakeup call for anyone who works nights, double or rotating shifts or who has ever climbed behind the wheel tired. Morgan was badly hurt and a companion killed when their limousine was rear-ended by a tractor-trailer whose driver had not slept in more than 24 hours. Four other passengers were also injured.

According to police reports, the driver, who has been charged with vehicular homicide, did not notice traffic had slowed in front of him. His rig slammed into Morgan’s limo, causing it to flip onto its roof. This in turn led to a pile-up involving four other vehicles.

Drowsy driving is a serious problem. Just one night of getting six hours or less sleep triples a driver’s risk for behaviors that mirror driving drunk.

Being under the influence of alcohol slows reaction time and impairs alertness. Being drowsy does the same thing. It also impacts judgment, leading people to underestimate the seriousness of driving tired and be overconfident in their abilities to handle it. A survey of American drivers conducted by the National Sleep Foundation found that more than half have driven while struggling to stay awake. A third admitted that they had actually fallen asleep. A joint report from the National Center on Sleep Disorders Research and the National Highway Traffic Safety Administration found that drowsy driving causes more than 100,000 crashes a year, 40,000 injuries, 1,550 deaths and more than $12 billion in monetary losses. 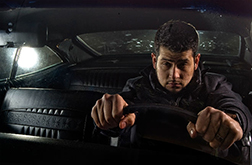 Why are drivers drowsy? 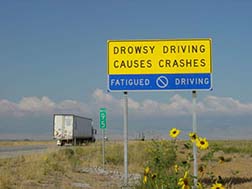 Warning signs of being drowsy behind the wheel:

If you are driving and experience any of these symptoms, pull over immediately and take a 20-minute nap. Don’t count on coffee and other caffeinated beverages, turning up the radio or opening the windows to keep you awake. If you are traveling with another driver, ask them to take over.

You are at increased risk for driving drowsy if you are:

It is also important to get treatment for any medical conditions that can disrupt sleep and to always read the labels of medications you are taking. If they contain ingredients that can make you sleepy, talk to your health care provider. Dosing times may be able to be adjusted or alternative medications might be available.