The subject of gun ownership can be controversial, with each side having strong views. Many people who own guns cite safety as a main reason – to protect their homes and loved ones. However, what is intended to save a life can also be responsible for taking it – by accident and suicide. 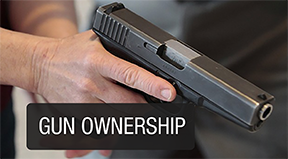 Those who choose to own guns should follow these recommendations to help prevent accidents in the home:

Another aspect of guns and safety that can be easily overlooked is suicide by firearm. Suicide is the tenth leading cause of death in the U.S., and guns are the most common way that people die by suicide. In 2016, the U.S. had 14,415 firearm homicides and 22,938 firearm suicides.

Studies show that the majority of suicide attempts occur within three hours of people deciding to kill themselves. Because firearms are so lethal, only 10 percent of people who use them in a suicide attempt survive, compared to much lower rates for other methods. One of the key factors that determines whether someone will die by suicide during a time of crisis is access to lethal means.

“Means reduction” is reducing a suicidal person’s access to lethal means and is an important part of suicide prevention. Means reduction is based on several key facts:

Veterans account for approximately 18 percent of adult suicide deaths in the U.S. but they are only 8.5 percent of the population. Approximately 20 veterans die each day by suicide. Veterans are even more likely than the general population to use a gun to commit suicide.

As the American Foundation for Suicide Prevention states, “By separating a suicidal person from their firearm even temporarily, you increase their chances for survival by removing a highly lethal method from their access. One of the important factors we can give a suicidal person is time: for the person to move out of the crisis moment and regain their usual healthier ways of coping; to receive help; for the attempt to be interrupted; or for the person to change their mind.”

If You Are in Crisis

Crisis Text Line – Text TALK to 741-741 to text with a trained crisis counselor for free. Veterans can text 838255 to contact the Veterans Crisis Line.