For years, unions have been working to prove with data what their members and contractors see every day in the field – that construction sites staffed by union workers tend to be safer working environments. So far, that’s been a difficult task, in part because injury reporting doesn’t collect certain key information and because of other factors such as concerns over workers’ privacy.

In our 2016 article, “Why ‘Right-to-Work’ Is Wrong for Safety,” we shared data from the Bureau of Labor Statistics showing that fatality rates are 54 percent higher in states with right-to-work laws. Now, a new study is providing more evidence that right-to-work laws are detrimental to worker safety and health.

The study, published in the BMJ Occupational & Environmental Medicine journal, found that a one percent decline in unionization results in about a five percent increase in the rate of occupational fatalities. In total, U.S. right-to-work laws are tied to a 14 percent increase in worker fatalities due to decreased unionization. The study concludes by noting the “protective effect” that unions have on worker safety and health.

“We’ve known for years that so-called right-to-work laws are a bad deal for workers’ paychecks, their safety on the job and the communities they call home,” says LIUNA General President Terry O’Sullivan. “Right-to-work laws are a direct assault on the power of collective bargaining, which remains one of the best ways to improve the safety and health risks workers face on a daily basis. LIUNA members, signatory contractors and all working people deserve better than so-called right-to-work, and we will continue taking every opportunity to fight it.”

This study may help explain why deaths in U.S. workplaces have been on the rise since 2013. Recently released 2016 data shows there were 5,190 fatal workplace injuries in the U.S., an increase of seven percent from 2015. That’s the highest number of workers who have died on the job since 2008. States like Michigan and Indiana have both seen a noticeable spike in on-the-job fatalities since passing right-to-work laws in 2012. A recent OSHA press release notes increases in workplace deaths from falls, struck-bys and machine hazards in Kansas, Nebraska and Missouri, all three of which have right-to-work laws. 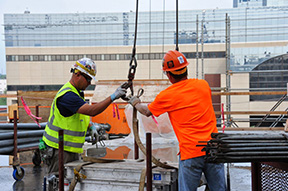 One likely explanation for these increases is that being part of a union gives workers the ability to speak up about hazards they see without worrying that they will face retaliation. As right-to-work laws weaken unions’ ability to collectively bargain, these same workers are increasingly without anyone to speak up on their behalf.

The BMJ study isn’t the only new research showing the union advantage when it comes to worker safety and health. The CPWR – the Center for Construction Research and Training – recently surveyed more than 3000 union and non-union construction firms about their safety management practices. The results speak for themselves: 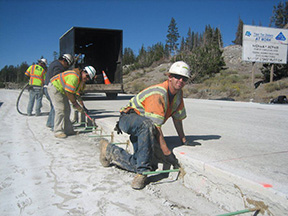 All of the practices above have a direct influence on worker safety and health. Prevention through design practices reduce the risk workers face for sprains, strains and other musculoskeletal injuries caused by tasks like repetitive lifting or working in awkward postures for extended periods of time. By designing the jobsite with workers in mind, contractors make it clear they value both worker safety and productivity. The same can be said for contractors that take the time to analyze jobsite hazards before work begins, and for those that empower workers to act as competent persons on the job. Putting these safety practices in place before incidents happen – and finding the root cause of incidents when they do happen – all lead to better outcomes for workers and projects.

Time and time again, research shows that engaging workers is one of the best indicators of a successful safety program. In the same CPWR survey mentioned above, 83 percent of union contractors said they considered worker involvement to be the most essential aspect of a world-class safety program. Only 66 percent of non-union contractors said the same. If you were a construction laborer, would you rather work for a company that valued your opinion when it came to keeping you safe, or one that didn’t?

At a time when unions are being weakened by Supreme Court rulings and more states are passing right-to-work laws, it’s important to remember that unions offer a safety and health advantage in the construction industry. Cooperation between labor and management produces a safer, more healthful work environment that has a big impact on worker safety.