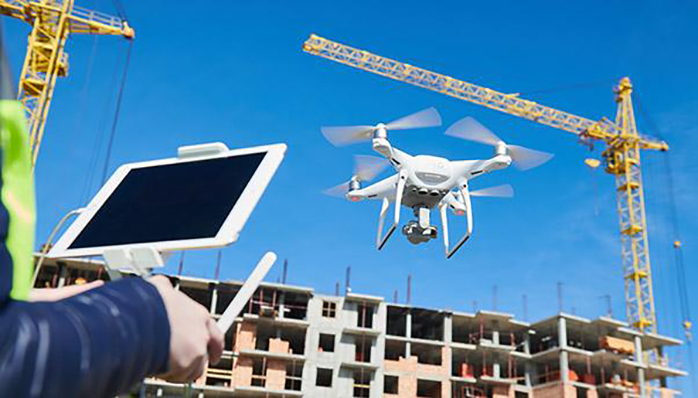 Drones, also known as unmanned aerial vehicles (UAVs), have seen many technological advancements since their origins in the military. Today’s drones are more lightweight, more agile and can stream live video, all while being operated from the ground by a pilot. Drone systems – which often consist of an operator, control system, ground and satellite equipment, communication links and the drone itself – are now being used in various ways on construction sites to prevent injuries and fatalities.

Use on Construction Sites

According to the National Institute of Occupational Safety and Health (NIOSH), “the emerging uses of UAVs in the construction industry range from aiding with construction project planning by aerial mapping of a construction site to extending the actual building of structures.”

UAVs can monitor construction sites, especially large sites or those spread out over several locations, often more quickly and efficiently than on-the-ground construction management. UAVs can be equipped with infrared cameras, radar and other technology that enhances their surveillance capabilities on a jobsite. This information is useful for tracking not only construction progress but also workers, equipment and material on a jobsite.

“Drones can also be a cost-effective and efficient way to perform site inspections,” says LHSFNA Management Co-Chairman Noel C. Borck. “Drone systems can be used to inspect remote sites for hazardous conditions or unstable structures without placing workers at risk. This is especially true for awkward or difficult-to-reach locations such as tall structures, on and under bridges and along busy highways.”

The Many Roles of Drones in Construction 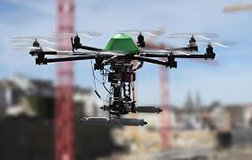 In addition to remote safety inspections, drones are being used for many other tasks in the construction industry:

In the case of highway work zones, drones can inspect the entire expanse of road or an adjacent structure when fast-moving traffic presents a serious hazard for workers. Drones can also be useful in applications where worker access is an issue and can also be equipped to perform work in spaces that are too small for humans.

The Federal Aviation Administration (FAA) maintains two sets of rules for UAVs. Its Special Rule for Model Aircraft covers hobby and recreational use, while use by construction employers falls under its Small Unmanned Aircraft System (UAS) Rule. The rules have slightly different requirements, but in both cases, drone operators should be aware of the following safe operation rules and tips:

Drone use may pose several different hazards to workers. These include overhead hazards if a drone falls from the sky due to low battery power or strikes a stationary object while in flight. Drone use may also open employers to privacy concerns depending on how they are used onsite. Lastly, drones are susceptible to cyber attacks just like virtually all of the other network-connected devices we use on a daily basis.

It’s recommended that employers purchase additional general liability insurance for their drones, though the FAA does not require this coverage.

The Future of Drones

Drones are being developed that incorporate X-ray technology and have the ability to create high-res 3D maps of objects using WiFi signals. This technology can be used to create accurate models of unknown areas behind walls or for structural monitoring of dangerous buildings, bridges or other structures.

Thanks to the variety of ways that drones can be used to help keep workers safe, they could soon be as common on construction sites as trucks and forklifts. As drone technology continues to advance, their usage in the construction industry is only expected to increase, especially if they can continue to improve worker safety, boost jobsite efficiency and reduce costs for contractors.

[April Dorsey is the OSH Division’s Safety and Health Specialist.]