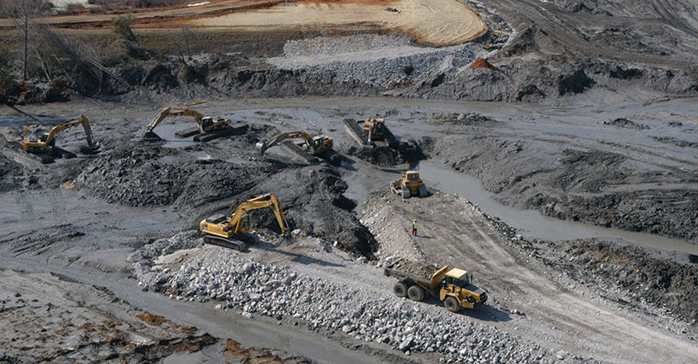 In 2008, the worst coal ash spill in U.S. history occurred at the Tennessee Valley Authority (TVA) Kingston Fossil Plant. The disaster covered 300 acres with more than 7.3 million tons of coal ash – enough to create ash piles 60 feet tall in some places.  More than 70 tons of arsenic and other toxic chemicals contaminated the nearby Emory River, killing fish and leaving lead levels 400 times higher than EPA limits. The cleanup effort that followed was a massive undertaking that took until 2015 to complete, at a total cost of more than $1.1 billion.

Coal ash (also called “fly ash”) is a byproduct of burned coal, and contains high concentrations of hazardous heavy metals like beryllium, mercury and chromium. These substances are known to cause multiple cancers, kidney disease, nervous system damage, asthma and numerous other health effects. Coal ash dust also contains crystalline silica, which can cause COPD and other chronic respiratory diseases. For more on the health risks of coal ash, see our article, “Risk of Coal Ash Exposure from Hurricane Flooding.” 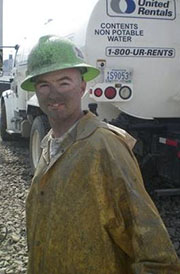 The TVA, a federally-owned utility, hired Jacobs Engineering to oversee the cleanup work. More than 900 workers across multiple trades, including at least 200 LIUNA members, began spending up to 70 hours a week removing millions of tons of coal ash and loading it for transportation offsite. Among other tasks, LIUNA members worked as spotters for heavy equipment, shoveled coal ash and loaded it into machines that would compress the ash and remove any liquid prior to transport. Early on, the wet coal sludge mired heavy equipment and pulled boots off workers’ feet. After the coal ash dried out, gray dust was everywhere on site.

In late 2009, workers started getting sick. They experienced fatigue, headaches, aching bones, persistent cough, swollen legs, sinus infections and trouble breathing. To this point, much of the cleanup work had been done without personal protective equipment (PPE). There are photos of workers knee deep in wet coal ash, their boots stuck in the sludge, without Tyvek suits or respirators. According to multiple reports, workers started asking for PPE with varying levels of success. Laborers on site were soon issued Tyvek suits and respirators, while it appears operators in heavy equipment were not. Many workers claim their requests for PPE were denied even when accompanied by doctor’s notes. Jacobs maintained that occupational exposures were not to blame for their symptoms.

Cleanup work continued, the battle over PPE still not settled. For their part, Jacobs says they did air sampling and took adequate action to suppress the dust on site to safe levels. Many reports allege that workers who complained were moved off the job for various reasons, and that others were afraid to speak up. Video shows one operator asking a supervisor if he’d be “signing his own death warrant” for his job if he wore his own respirator – and the supervisor says yes. By 2013, as more and more workers began having respiratory problems and other health issues, the first lawsuit was filed. That court battle is still ongoing six years later. 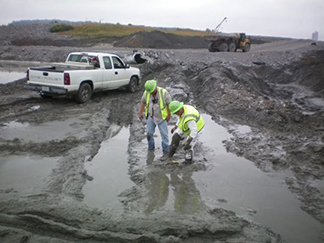 A decade after cleanup began, over 40 workers have died and 400 more have gotten sick. Some of them have been diagnosed with lymphoma, bone cancer and various blood diseases. These are all symptoms of long-term exposure to radium, which the TVA’s own records show existed in the coal ash kept at the Kingston site. Jacobs and the TVA have maintained that based on their own exposure level testing, additional PPE such as respirators and Tyvek suits were not needed during cleanup. Workers dispute these results and allege they were never told about the health risks of coal ash. Instead, workers say safety managers told them that coal ash was so safe “they could eat a pound a week” with no ill effects.

Many have blamed the lack of protection for workers on the TVA seeking to downplay the long-term effects of the spill on the public and environment. The TVA’s own report notes the criticism it faced for telling the public that “most of the material is inert,” while telling members of Congress at the same time that coal ash “has the potential to cause a number of environmental and human health impacts.” In a 2009 60 Minutes interview, a TVA spokeswoman claimed she’d swim in the contaminated Emory River – before having to retract that statement due to an EPA advisory against swimming in the river. TVA has also denied responsibility for arsenic contamination in groundwater at several other coal ash landfills throughout the state. From the TVA’s perspective, it’s easy to see how putting all workers in protective gear from the start could have been viewed as admitting that coal ash exposure was more harmful than the TVA wanted the public to believe. 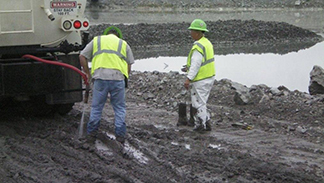 After public outcry, the TVA commissioned a medical monitoring program for residents near the Kingston site (40 percent of whom reported respiratory conditions following the spill), but didn’t do the same for workers. Now workers and their families are fighting for compensation and medical care from a contractor and project owner that still deny any wrongdoing. This battle for medical compensation is similar to what went on following the September 11th terrorist attacks, when first responders and cleanup workers started getting sick from exposure to toxic substances at Ground Zero and other sites. Now, more than 70 cancers and many other diseases are included on the list of conditions that first responders and others can receive care for under the James Zadroga 9/11 Health and Compensation Act.

While the cleanup from the initial spill is over, workers in Tennessee continue to face health risks from coal ash. An ongoing investigation by USA Today Network-Tennessee found photos of coal ash accumulating on the floorboards of enclosed cabs at another TVA plant in the state. In addition to being a potential health risk to workers on site, this dust can pose a hazard to workers’ families if it’s tracked home at the end of the shift. Michael McCarthy, who worked cleanup at the Kingston site, says that’s exactly what happened to him and his family.

“I used to come home with the ash on me – on my clothes, in my hair, my ears, up my nose, my throat, on my boots, everywhere,” says McCarthy. “I came home and took care of my babies. I played with them and held them while I was contaminated.” McCarthy has had three heart surgeries since 2012 and his wife and children now have chronic health issues as well.

The continued risks to workers have garnered so much attention that worker safety groups have campaigned for the TVA to remove Jacobs Engineering as the contractor on these coal ash sites. Jacobs received more than $60 million in management fees during this project.

The outcome of the lawsuits against the TVA and Jacobs Engineering are still pending, and it should be noted that several LIUNA members are among the more than 70 workers seeking compensation and medical care. If the court agrees that Jacobs knowingly endangered the health of workers, let's hope that the workers and their families get the compensation they rightfully deserve both now and in the future. The length of time it takes for many chronic health conditions to develop virtually guarantees that more workers from the Kingston site will get sick down the road. Any medical monitoring or health care compensation should be structured to include all exposed workers, as the Zadroga Act did for first responders and cleanup workers after 9/11.

These workers put in long hours in a tough situation, and by all accounts these were steady, good paying jobs. But making a good paycheck shouldn’t cost you your life. It’s time to do right by these workers and their families.