A career in construction can be very rewarding, offering both physical and mental challenges, work that’s always changing and excellent pay and benefits. However, we know the nature of the work also brings risks to worker safety and health. Physically demanding work creates risk for injury, while tight work schedules and varying job locations can lead to extended shifts, irregular work hours and long commutes.

These factors and others are what make construction workers among the most at-risk employees in any industry for experiencing fatigue on the job.

In its simplest terms, fatigue occurs when we’re low on energy. In more scientific terms, fatigue is physical or mental exhaustion as a result of exertion. Fatigue can be physical or mental and often occurs as some combination of the two. Many additional factors can contribute to fatigue, including lack of sleep, disruption of sleep patterns, diet, times of emotional stress and chronic health conditions such as diabetes.

It’s estimated that fatigue is at least a contributing factor in a third of all occupational injuries. When the body is fatigued, our situational awareness suffers, along with our memory, concentration and ability to quickly make decisions. Several studies have compared the performance effects of fatigue to being under the effects of alcohol. OSHA notes that working 12 hours a day is associated with a 37 percent increase in injury risk.

“This is why it’s so important to reduce fatigue on construction sites and in all workplaces,” says LIUNA General Secretary-Treasurer and LHSFNA Labor Co-Chairman Armand E. Sabitoni. “With safety as the goal, everyone can take steps to maintain the level of situational awareness on site and limit incidents related to fatigue.”

Risks for Fatigue in Construction

A National Safety Council (NSC) study on fatigue concluded that 100 percent of construction workers had at least one risk factor for on-the-job fatigue. If that sounds hard to believe, consider that the following all make it more likely for a worker to become fatigued:

That list is pretty much the everyday life of a construction worker, as least during many times of the year. Extended shifts, working at irregular times and long commutes all contribute to fatigue because they make it more difficult for workers to get the rest they need to recharge. In the NSC survey, 75 percent of workers said the demands of the job affected their level of fatigue. Another series of worker surveys found that workers often felt fatigued “to the point that they had safety concerns” after working 10 hours a day for three to four days in a row. 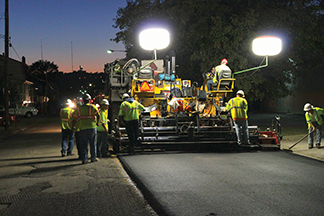 Results also showed that working long weeks, having fewer than 12 hours between shifts or engaging in shift work all made it more likely that workers didn’t get at least seven hours of sleep. There are only so many hours in the day, especially when workers also have other responsibilities after they get home, like spending time with family

The NSC survey also revealed a significant gap between how workers and management feel about fatigue. Almost all construction employers (98 percent) said fatigue was a safety issue, but only 75 percent of workers said the same. It’s hard to say for sure why this safety climate gap exists. One possibility is that some workers believe being fatigued is just part of the job – they know construction is hard work and don’t shy away from that.

It’s our job as safety professionals to first educate workers that fatigue leads to a greater risk of injury for them and their coworkers, then find ways that both employers and workers can identify, prevent and lessen fatigue on construction jobsites. Here are some recommendations: 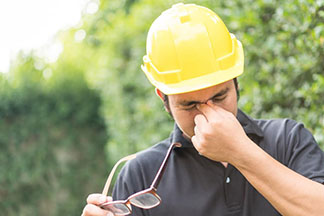 OSHA does not have a specific standard related to fatigue, but the agency does recognize it as a potential workplace hazard, so employers should take steps to reduce its effects. It may be impossible to eliminate fatigue in construction, but that doesn’t mean we shouldn’t take steps to limit it.

Lack of sleep is closely tied to fatigue. It’s well-documented that many people don’t get enough sleep, with the CDC estimating that one in three Americans don’t regularly get the recommended seven hours of sleep each night. The body repairs damaged tissues and muscles and restores energy levels during sleep, making it an especially critical part of preventing fatigue. So while lack of sleep and fatigue are closely related, it’s not as simple as saying lack of sleep is the only cause of fatigue.