The Trouble with Comparing LIUNA Members to the Average Construction Laborer

Every year, safety and health professionals look at the latest injury and fatality data released by the Bureau of Labor Statistics (BLS) to better understand the hazards facing construction workers. We’ve covered these trends in Lifelines many times, most recently in January and February of this year.

“LIUNA members are not your average construction laborer. They are highly skilled and highly trained from their time in apprenticeship programs and LIUNA’s network of training centers,” says LIUNA General President Terry O’Sullivan. “They show up to work alongside fellow members for LIUNA signatory contractors that have committed to meeting and exceeding standards for safety on the job. Those differences are clear to see on a daily basis.”

Unfortunately, the BLS only reports broad project categories and the number of workers employed on a project. Yet even dissecting those figures, big differences emerge. The injury rate for residential construction is 3.0, while the injury rate for non-residential projects is 1.9. Projects with 11-49 employees have the highest rate of injuries and fatalities at 3.2, while projects with 1000 or more employees have a rate of 0.8. All of these different projects and circumstances get averaged together to arrive at the injury numbers reported by the BLS. The same problem exists with the current construction laborer fatality rate.

While these single numbers give safety and health professionals a measuring stick to compare year over year, they hide the fact that all construction laborers are not the same. We know that LIUNA members are generally employed on large, non-residential projects, while smaller and residential projects generally employ other construction laborers. LIUNA members generally go to work on larger projects for larger companies that have the resources to implement and maintain strong safety and health programs. Many of these larger projects have worker training requirements and explicit subcontractor prequalification requirements related to safety (such as an insurance EMR of less than 1.2 or a lost workday injury rate below 2.0). A subcontractor vetting process that makes safety a requirement is part of the reason these larger projects tend to have much lower injury rates – these requirements keep the “below average” company from even bidding on that work. 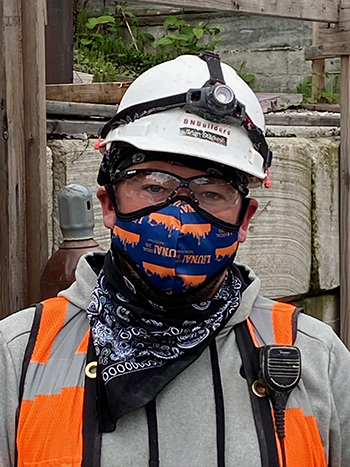 None of this is to say that LIUNA members don’t get seriously injured or die on the job, or that there aren’t steps that LIUNA signatory contractors could take to improve safety conditions for workers. It’s that the types of injuries and fatalities most commonly faced by LIUNA members in the field don’t seem to match up with the data cited by the BLS. When staff from the Fund’s OSH Division go on site visits to LIUNA signatory contractors, the disconnect between those projects and the rates cited by the BLS are apparent.

“We regularly see signatory contractors on large projects go a year or more without a recordable lost time injury,” says Walter Jones, the Fund’s Director of Occupational Safety and Health. “Those kinds of results don’t match up with the construction injury experience that BLS is showing. We almost always find safety metrics that far surpass the averages cited by the BLS.”

Anecdotally, the number one workplace fatality reported to the LHSFNA is related to transportation incidents, primarily motorist intrusions into the work zone. According to the BLS, transportation incidents accounted for 73 construction laborer deaths in 2019. However, we covered earlier this year how current BLS data collection methods can obscure the true toll on highway workers due to the way certain incidents are categorized. The concern is that this miscategorization may lead to the misdirection of resources or the wrong emphasis for safety training and awareness campaigns.

“Year after year, BLS data says the majority of construction laborers die during falls from heights,” says Jones. “For the last several years, it appears that far more LIUNA members are dying from motorist intrusions into highway work zones. That makes sense because while our contractors seem to have better control of activities within work zones, they have far less control over the highway outside the work site.”

When looking at the level of safety for an entire industry, it’s convenient to use a single number. If the goal is to understand the hazards facing workers and the very different experiences a career in construction can present, it’s a practice we should start moving away from.