Although the general public doesn’t have much risk of contracting Ebola, some of LIUNA’s service contract members recently found themselves on the front lines. Environmental services workers from LIUNA Local 572 are employed at both the National Institutes of Health (NIH), which recently treated Dallas nurse Nina Pham when she contracted Ebola, and Dulles International Airport in Virginia, which is one of five U.S. airports accepting flights from Ebola-stricken countries in West Africa.

When Laborers at both locations raised questions and concerns about Ebola, the LHSFNA worked with LIUNA Training and LIUNA Local 572 to set up staff visits to each site. Travis Parsons, the OSH Division’s Senior Safety and Health Specialist, and Emily Smith, the Health Promotion Division’s Wellness Coordinator, traveled to both sites in late October. In addition to educating members about the facts surrounding Ebola, Parsons and Smith worked to ensure that proper protocols and training were in place to protect the Laborers at each site.

“Because it’s a hospital environment, the main concern at NIH was making sure Laborers were protected if they entered the ‘hot zone’ – the area where an infected person is being treated,” said Smith. “In this case, LIUNA members cleaned the room to prepare for the infected patient’s arrival, but thankfully that’s as close as they came to a ‘hot zone.’”

At NIH, nurses double-bagged all waste in the “hot zone” and processed it through an autoclave – a chamber used to sterilize equipment and supplies with high-pressure saturated steam. During their visit, Parsons and Smith distributed and discussed the LHSFNA’s new Ebola fact sheet, then held a Q&A session to address any additional concerns workers had.

Unlike the members at NIH, the Laborers at Dulles International Airport do not work in a hospital environment. These janitorial service workers are tasked with cleaning all over the airport, including the bathrooms in the terminal where NIOSH is screening passengers arriving from West African countries affected by Ebola.

“Because Ebola is primarily transferred through an infected person’s bodily fluids – any of which might be present in an airport bathroom – there were some legitimate concerns to address here,” said Parsons. “These members could also come into direct contact with passengers or crew members arriving from West Africa.” 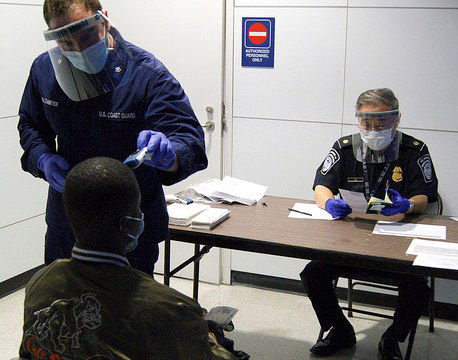 At Dulles, Parsons and Smith used the Fund’s new Ebola fact sheet as a springboard for a more in-depth Q&A to field member questions. They also reviewed the recommended personal protective equipment (PPE) and proper protocols for disinfection, cleanup and waste disposal. Some of this information was based on the CDC’s recently released interim guidance about Ebola infection for airline crews, cleaning personnel and cargo personnel. OSHA has also issued its own Ebola fact sheet for non-healthcare workers.

“We recommended that these environmental services workers practice double gloving, wear long sleeves, make use of eye protection and use NIOSH-approved, fit-tested N95 respirators,” said Parsons. “By answering questions about how the virus is transmitted and how to prevent infection, we were able to put some fears to rest and make members more comfortable about coming to work.”

OSHA recommends the use of N95 respirators in cases where exposure could occur from using pressurized air or water sprays during cleaning. These cleaning methods run the risk of creating aerosolized water droplets containing the Ebola virus, which could then be inhaled. Although Ebola is not an airborne virus, it may be transferable in droplet form. For this reason, many Ebola experts follow the rule of thumb of staying at least six feet away from someone who may be infected.

If there are questions at your workplace about Ebola or other infectious diseases, call the LHSFNA at 202-628-5465 for more information or to schedule a site visit. The Fund is always available to provide owners, signatory contractors and members with the information necessary to ensure health and safety both on and off the job.