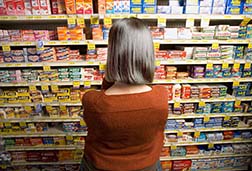 What Medication Do You Take When You’re Under the Weather?

Are you treating your sprained ankle with the same over-the-counter (OTC) pain reliever that you keep on hand for headaches?

If so, you are probably not getting a lot of relief.

You could also be damaging your health.

Acetaminophen and nonsteroidal anti-inflammatory drugs (NSAIDs) – common over-the-counter pain relievers – are not interchangeable. Depending on your source of pain and what other medications you may be taking, some of these drugs are more effective than others. OTC pain relievers can also aggravate certain medical conditions. If a hangover has anything to do with why you are feeling poorly, certain OTC pain relievers may actually be dangerous to take.

“It is just as important to be aware of the benefits and risks of over-the-counter medications as it is to be familiar with those associated with prescription drugs,” says LHSFNA Management Co-Chairman Noel C. Borck. “Stomach ulcers as well as kidney and liver problems are among the conditions that can develop when over-the-counter pain relievers are taken in large doses, taken for weeks at a time or are just flat out the wrong medication to take.”

NSAIDs reduce inflammation by blocking production of the enzymes in the body that cause pain and swelling. OTC NSAIDs – aspirin, ibuprofen and naproxen – are effective against arthritis pain, muscle strains and sprains and other minor aches. Because alcohol consumption can trigger an inflammatory response from the immune system, (this is what makes people feel sick), NSAIDs can be helpful in treating hangovers. However, they can also cause upset stomachs and should always be taken with food. Furthermore, differences in the various chemical makeups of NSAIDs – aspirin, especially – can affect overall health.

Aspirin, also known as salicylic acid, is the oldest OTC on the market. Salicylic acid, which is also found in a number of acne and plantar (foot) wart medications, dissolves substances that make cells stick together. This includes blood clots. To reduce the risk of heart attack and stroke, health care providers sometimes instruct patients to take a daily low-dose aspirin. However, aspirin is not a go-to drug for everyone. It can interact with commonly prescribed blood thinners including warfarin and Eliquis, and also with vitamin E and certain dietary supplements. Anyone who uses any of these medications and supplements should check with their health care provider before taking aspirin.

Children recovering from viral illnesses including chickenpox, the flu or the common cold should never be given aspirin. Reye’s syndrome, a sometimes fatal complication of viral illness, particularly in children, has been linked to aspirin use.

Ibuprofen (Advil or Motrin) is a little stronger than aspirin and is often more effective than aspirin for treating soft tissue injuries and dental pain. Ibuprofen’s blood thinning effects are milder than those caused by aspirin. If you are taking a blood thinner, ibuprofen may be a better choice, but it is important to check with your health care provider first. Ibuprofen can cause upset stomach and should always be taken with food.

Naproxen (Aleve) is the most powerful OTC NSAID on the market. Because naproxen is stronger than other NSAIDs, less of it is needed to get relief. As with ibuprofen, naproxen should never be taken on an empty stomach. If you are taking a blood thinner or other prescribed medication, check with your health care provider before taking naproxen.

Acetaminophen (Tylenol) addresses pain neurologically, changing how the body senses it. Acetaminophen can relieve pain from tension headaches, fevers and minor aches. Acetaminophen does not have the anti-inflammatory qualities of NSAIDs, making it less effective in treating physical injuries where swelling is likely such as muscle sprains and broken bones.

Acetaminophen has few side effects and is often found in OTC medications that treat allergies, colds and upset stomachs. However it does have risks. Liver damage is the most serious, and consuming alcohol while taking acetaminophen increases this possibility. Anyone who consumes three or more alcoholic beverages a day should never take acetaminophen or any medication that contains it. Furthermore, unless directed by a physician, acetaminophen should never be taken for longer than 10 days.