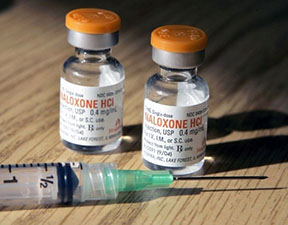 The nation’s decades old war on drugs has a new twist. Rather than sticking to the earlier playbook – curtailing illicit drug use through increased enforcement and harsh sentences – President Barack Obama is seeking to combat the nation’s heroin and prescription drug abuse epidemic through prevention and improved treatment.

Prescription opioids killed more than 16,000 people in the United States in 2013. That same year, more than 8,000 deaths were linked to heroin. In response to these statistics, the President’s proposed 2016 budget includes $133 million earmarked for expanding state-level prescription drug overdose prevention and treatment programs.

Meanwhile, some businesses in the private sector are moving ahead with their own efforts to combat drug abuse. A growing number of drugstores are dispensing the overdose-reversal drug naloxone without a prescription.

Naloxone is available in Canada by prescription only. However, a number of provinces and territories are asking that it be made available over-the-counter and Health Canada is conducting a review. A decision is expected sometime in 2016.

In the meantime, a number of cities are taking steps to make naloxone more readily available. These include allowing a wider range of professionals to administer naloxone, providing take-home naloxone kits to opioid users and training family members and friends how to administer it in case of an overdose.

“Naloxone is a safe and effective antidote to opioid overdoses and by providing access to this medication in our pharmacies without a prescription in more states, we can help save lives,” said Tom Davis, a Vice President at pharmacy giant CVS, when explaining how the company came to make naloxone available over-the-counter (OTC) in 14 states.

CVS wants naloxone to be sold OTC at all of its outlets and is reviewing options, Davis said. And while the Rhode Island-based pharmacy retailer is garnering the most headlines, a number of drugstore chains and independents are also moving toward or have already made naloxone available to those who ask for it.

Naloxone blocks the effects of opioids by attaching itself to the parts of the brain that regulate breathing. Respiratory depression is what kills most people who die from overdosing on hydrocodone, codeine, methadone, heroin and other opioids. When administered in the early stages of an overdose, naloxone reverses respiratory depression and restores the ability to breathe.

Naloxone has been successful in saving thousands of lives and it would save even more if more people had access to it. Advanced emergency medical service (EMS) personnel, the primary administers of naloxone, are not always available when someone calls 9-1-1. That is also assuming a call is even made. While more states are passing Good Samaritan laws, fears that they will be prosecuted can make witnesses to an overdose reluctant to seek help. And when naloxone has been available to family and friends of drug abusers, its prescription-only status has discouraged many of them from purchasing it.

Protect Your Kids: Lock Up Your Pills

Most of these youngsters are toddlers and most of the medications are opioid pain relievers and drugs used to treat opioid dependence such as buprenorphine.

Obama announced his strategy for battling drug abuse during a recent community forum in Charleston, West Virginia. The Mountain State has the highest drug overdose mortality rate in the country.

“We can’t fight this epidemic without eliminating stigma,” he said. “With no other disease do we wait until people are a danger to themselves and others…This is an illness, and we’ve got to treat it as such.”

Drug-free workplace policies and programs can help protect employers and employees from the consequences of alcohol abuse, illegal drugs and the misuse of prescription pain relievers and other medications.

The LHSFNA’s Health Promotion Division can help develop and/or review drug-free workplace policies and programs tailored to the unique needs and challenges of specific workplaces. For more information, call 202-628-5465. Pamphlets, booklets and program materials about various aspects of substance abuse and drug-free workplace programs can be ordered through the LHSFNA’s website at www.lhsfna.org by clicking on Publications.