Hawaii Bumps Up Smoking Age, Other States Likely to Follow 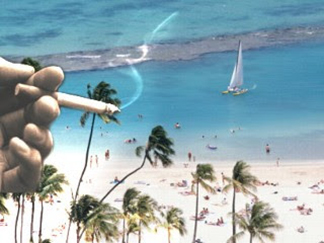 A law that is likely to have a positive outcome for public health goes into effect in Hawaii on New Year’s Day. That is when the Aloha State raises its legal smoking age to 21. Effective January 1, underage smokers and anyone who provides them with tobacco products are subject to fines and mandatory community service.

The legislation, which also includes electronic cigarettes, could signal the beginning of a domino effect. A number of states including California, New Jersey and Rhode Island are considering similar measures. Meanwhile, many local governments are acting on their own. According to the Campaign for Tobacco-Free Kids, at least 97 cities and counties, including New York City, Evanston, Illinois; Cambridge, Massachusetts and Columbia, Missouri have already raised the smoking age in their jurisdictions to 21.

Lila Johnson, program manager for the Hawaii Tobacco Prevention and Education Program, said the law reduces the likelihood that teens will become smokers because it limits their access to tobacco during pivotal years for experimentation. Research conducted by the Centers for Disease Control and Prevention (CDC) finds that nicotine exposure during adolescence often leads to addiction.

A Top Cause of Disease, Disability and Death

More than 16 million Americans suffer from diseases linked to smoking. These include heart disease, various cancers and lung diseases.

Every year, more than 480,000 Americans, some of whom never smoked themselves but were exposed to tobacco smoke, die from smoking-related illnesses. These illnesses and deaths cost the U.S. more than $300 billion a year.

“It removes anybody who is of tobacco-buying age from the high schools … because we learned that most young people get their tobacco products from a social source,” Johnson said.

Nationwide momentum for raising the smoking age has been building for some time. Forty-two million Americans smoke and most of them started long before they turned 18 – currently the minimum legal age in most states for buying and using tobacco products. Today, more than 600,000 middle school students and three million high school students smoke cigarettes. Like their adult counterparts, they are also increasingly using electronic cigarettes. According to the FDA’s Center for Tobacco Products and the CDC, e-cigarette use among middle and high school students tripled between 2013 and 2014.

Quit Smoking with Help from the LHSFNA

“It gives them time to mature and think about what they're doing,” Baker said. “Also, studies show you’re going to give them a longer, healthier life, and it’s going to add money and more productivity into the workforce – people will not be sick as a result of a lot of smoking-related diseases.”

According to a recently released report from the Institute of Medicine, a minimum smoking age of 21 in the U.S. would lead to nearly a quarter-million fewer premature deaths among people born between 2000 and 2019.

“It really is about good public health,” said Baker. “If you can keep individuals from beginning to smoke until they’re at least 21, then you have a much greater chance of them never becoming lifelong smokers.”