Avoid the Grip of Gout

It used to be called “the king’s disease,” but many Americans are as much at risk for gout as Henry Vlll, who was obese and, historians believe, a type 2 diabetic. For the very same reasons – unhealthy eating habits, consumption of too much alcohol and lack of exercise – obesity and type 2 diabetes are rampant in the United States and Canada. Just as these conditions led to gout for King Henry, incidences of gout are among the consequences for an increasing number of people. 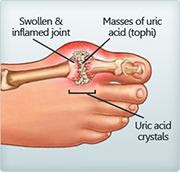 Gout is a form of arthritis that causes sudden and severe pain and swelling in the joints. The large toe is usually the most affected, but gout also flares in knees, ankles and feet and in hands, wrists, fingers and elbows. The pain often starts during the night, waking victims from sleep and lasting for days. Symptoms include:

Gout is caused by a buildup of uric acid in the blood. The body produces uric acid as part of the digestive process when breaking down substances called purines, which are found in abundance in certain kinds of food. Most uric acid dissolves in blood, travels to the kidneys and leaves the body in urine. However, it can overwhelm the kidneys and, instead of passing out of the body, crystalize around the joints to cause gout. (Uric acid crystals can also cause kidney stones and in some instances, kidney failure.)

These foods are high in purines and increase risk for gout:

Gout occurs most often in men between the ages of 40 and 50. When women develop gout, it usually occurs after menopause.

If you are prone to gout:

Help from the LHSFNA

The Nutrition and Fitness for Laborers program can help Laborers improve dietary and exercise habits, thus reducing their risk for gout and other health problems. For more information, call 202-628-5465.

Fund publications including Becoming Physically Active, Build a Better Body and Weight Matters provide additional tips and information on exercise and diet. Order these and other materials by going to www.lhsfna.org and clicking on Publications.