“Each election cycle, more states are legalizing medical marijuana and recreational marijuana, while others are decriminalizing it,” says LIUNA General Secretary-Treasurer and LHSFNA Labor Co-Chairman Armand E. Sabitoni. “Monitoring this rapidly changing issue and educating LIUNA members about what these laws mean for them in regard to their careers continues to be of the utmost importance.”

The map below shows each state’s laws as of February, 2015. 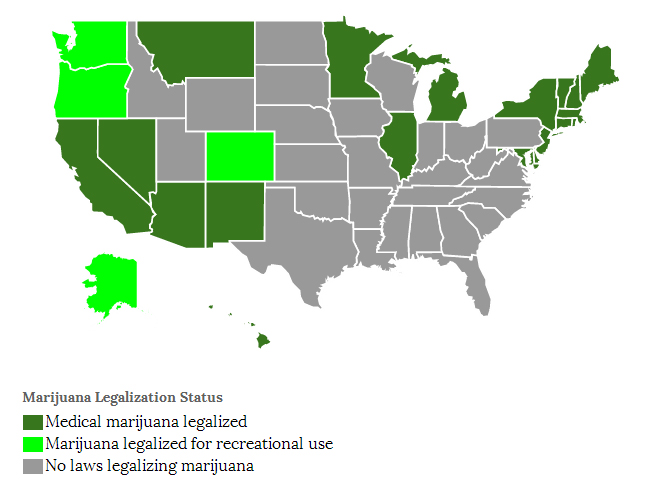 There are currently three categories of marijuana use allowed in the U.S.

Despite any state laws making marijuana legal for recreational or medicinal purposes, marijuana is still illegal under federal law. The federal government classifies marijuana as a Schedule I drug – meaning it has no currently accepted medical use and has a high potential for abuse. Schedule I drugs are considered the most dangerous and cause potentially severe psychological or physical dependence.

A common question from both LIUNA members and signatory contractors is whether an employer can restrict an employee from using marijuana during the employee’s off hours.

Because marijuana is illegal under federal law, employers generally don’t have to accommodate an employee’s marijuana use, even if it is off the clock. In addition, employers can drug test employees, requiring and expecting them to be able to pass work-related drug tests, including tests for marijuana. In short, when federal and state laws conflict, the federal law “wins.”

Further, because marijuana use is illegal under federal law, any workplace that receives federal funding or is subject to federal regulations requiring the testing of safety-sensitive workers (e.g., the Department of Transportation) must consider marijuana a prohibited substance according to the Drug-Free Workplace Act of 1988.

To date, a number of courts have addressed the intersection between employers and employees over the issue of medical marijuana. Federal and state employment laws have overwhelmingly found in favor of employers.

Part of the challenge in allowing marijuana use off the clock is the lack of established standards for what constitutes impairment and the ability to test for impairment. While alcohol impairment can be determined by a breath alcohol test, no such technology exists for marijuana, although it is currently under development.

Employers have a responsibility to keep workers safe. Drug-free workplaces help provide for a safe, healthy and productive workplace. Marijuana use can contribute to workplace accidents, injuries, absenteeism, presenteeism (showing up for working but not being fully productive), higher workers’ compensation costs and higher job turnover.

The discussion about marijuana and the workplace will continue to evolve. The LHSFNA will always act in the best interest of LIUNA members and signatory contractors, keeping health and safety in the forefront of all guidance. To have the LHSFNA’s Health Promotion Division provide guidance or review your workplace drug testing policy, call 202-628-5465.

[Jamie Becker is the LHSFNA’s Associate Director of Health Promotion.]