Don’t Want Your Kids to Smoke? Talk to Them about E-Cigarettes

If you’re a parent, you may have talked with your kids about not smoking, especially if you’re a current or former smoker who regrets the habit. If you’ve had these discussions, have you included e-cigarettes?

While research indicates that e-cigarettes may be safer and less addictive than other forms of tobacco and may even help smokers quit, using them may also be a gateway to smoking. A new study published in the American Journal of Medicine found that young adults who first experienced smoking via e-cigarettes quadrupled their chances of moving on to conventional cigarettes within 18 months.

Why e-cigarettes encourage young people to use tobacco isn’t clear. Researchers speculate that the devices, which deliver a vaporized stream of liquid nicotine, mimic the behavior of smoking a conventional cigarette. For some people, the ritual of lighting up, taking a drag and holding the cigarette, whether it’s electronic or otherwise, can be just as addictive as nicotine. 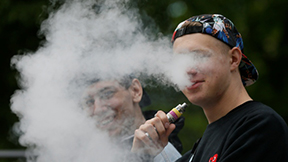 E-cigarettes are now the most commonly used form of tobacco by middle and high school students in the U.S. This is significant because this age range is when most smokers and users of other tobacco products pick up the habit. According to the Food and Drug Administration, more than two million middle and high school students used e-cigarettes and other electronic nicotine delivery systems such as e-cigars and e-hookahs in 2016. Reasons why e-cigarettes in particular have become popular include curiosity, taste and the perception that they are not as harmful as conventional cigarettes.

When users of e-cigarettes inhale that vaporized stream of liquid nicotine, they may not be ingesting the carbon monoxide, hydrogen cyanide and other carcinogens found in cigarette smoke, but they are getting a dose of formaldehyde, which is a cancer risk. They are also increasing their risk for other serious health conditions. Exposure to nicotine in any form increases heart rate and blood pressure, may contribute to insulin resistance and type 2 diabetes and is highly addictive. The very act of vaping, even when the e-liquid doesn’t contain nicotine, can be hazardous to the lungs as doing so causes inflammation, which can increase risk for serious respiratory conditions like chronic obstructive pulmonary disease (COPD). 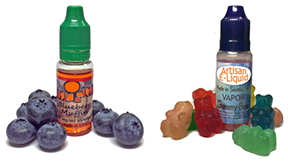 Liquid nicotine is also a household hazard. Many brands are brightly colored and smell like candy or fruit, making them appealing to young children. Calls to poison centers and emergency room visits related to children ingesting liquid nicotine have skyrocketed, with more than 2000 cases reported in 2015.

The bottom line is e-cigarettes are not risk free. When you have “the tobacco talk” with your kids, make it clear that these devices are not safe. Like conventional cigarettes and all tobacco products, staying away from e-cigarettes is one of the most important steps you can take to protect your health. 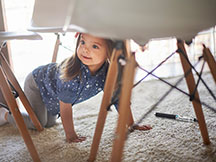 The LHSFNA has developed a number of materials that can help educate Laborers about the hazards of tobacco. Our Quit Smoking Kits contain a collection of pamphlets developed by the Health Promotion Division and other partners including the American Cancer Society and the Centers for Disease Control and Prevention (CDC). Pamphlets include Tobacco Use: How Does It Affect Laborers?, Facts About Lung Cancer for Laborers and Deciding How to Quit: A Smoker’s Guide. Quit Smoking Kits can be ordered by calling the Health Promotion Division at 202-628-5465 or by picking up a postcard at one of our health fairs.

Additional pamphlets on tobacco, including Making the Right Decision about Tobacco Use and Smoking Cessation Program for Laborers as well as other materials that can help protect the health and safety of Laborers, can be ordered through the Fund’s Publications Catalogue or by calling the Health Promotion Division.

Free confidential support for quitting smoking is also available by calling the CDC’s quitline at 1-800-QUIT-NOW.

More information about the LHSFNA’s partnership with the CDC’s Tips from Former Smokers™ Campaign is on our website.