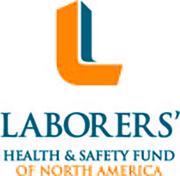 Shutdown Impacts Workers and Their Families

Freezing temperatures and harsh winter weather are often the norm this time of year for many parts of the country. But one event that no one could have forecast is that this winter would also bring the longest government shutdown in the history of the United States. Across the U.S., the shutdown took its toll on federal employees, their families and countless other people who rely on key government services as part of their daily lives. Some Laborers’ International Union of North America (LIUNA) members and signatory contractors were also impacted during the shutdown, as several states delayed starting road and bridge projects tied to federal funding. With the shutdown over, LIUNA members and signatory contractors are finally able to get back to the business of rebuilding our nation’s crumbling infrastructure. 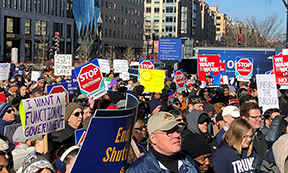 One issue the government shutdown brought to the forefront is the financial uncertainty that many families in the U.S. deal with on a regular basis. Recent surveys show that almost 80 percent of Americans live paycheck to paycheck. That’s why organizations like the United Way mobilized to help federal employees who had bills to pay but no means to pay them. Here at the Laborers’ Health & Safety Fund of North America (LHSFNA), we recognize that the mental health impacts caused by stress, including financial stress and uncertain work hours, are very real. This is one of several reasons why the Fund supported ending the shutdown and the burden that was being placed on federal employees – thousands of whom count themselves as both military veterans and union members.

In other news, the Bureau of Labor Statistics (BLS) recently released its 2017 workplace fatality report. While this data lags a year behind today’s workplaces, it remains an important way to identify and track occupational safety and health trends. Overall, workplace fatalities, including those in the construction industry, decreased slightly from 2016. This decline was largely driven by fewer fatalities related to transportation incidents, workplace violence and workers being struck by objects on the job. While these trends are headed in the right direction, the report also highlighted several areas of concern. For example, fatal falls were at their highest level in the 26 year history of the report, accounting for 17 percent of all worker deaths. Unintentional overdoses on the job increased 25 percent from 2016, marking the fifth year in a row that workplace overdose deaths went up by at least 25 percent. Unfortunately, this confirms what many public health experts already suspected – even with so much effort being put into stopping the opioid epidemic, the problem was still worsening as recently as 2017. We remain hopeful that continued hard work from the many different stakeholders that have a hand in reducing dependence on opioids will show positive results in next year’s 2018 data and beyond. 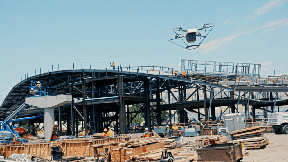 As 2019 gets underway, it’s natural to look toward the future and what changes may be ahead for the construction industry. As is the case in many other industries, technology is also driving innovation in construction. The growing number of drones on construction job sites, and the tasks they are being used for, stands as just one example. However, the very nature of construction, including the constantly changing work environment and the need for fast-paced, coordinated efforts from multiple crafts, ensures that the industry isn’t going to change overnight. Strong partnerships between labor and management will help ensure that as innovation does arrive, we’ll have an opportunity to shape its true impact on our industry. The LHSFNA will stay focused on ensuring that LIUNA members still have a safe and healthful work environment, and that new technologies aid that goal, not act as a replacement for the years of training and expertise that construction workers bring to the table.