The most recent (2012) construction data from the U.S. Bureau of Labor Statistics (BLS) fits the pattern of on-going, general decline in workplace injury, illness and fatality rates, but history shows that a significant bump in these rates is now likely as the economy shows signs of again picking up speed. 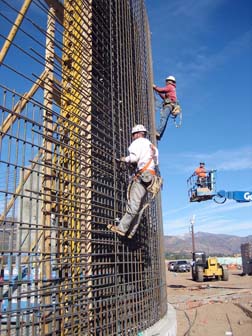 Employment can expand rapidly, particularly in construction, during the initial period of an economic upswing. That is a boon for Laborers, but a 2010 analysis by NIOSH researchers demonstrates that reversals in a business downturn have direct impact on the extent of occupational injuries in the industry. Tracking injury rates from 1976 through 2007, researchers found that upticks in four indicators – real GDP, employment, industrial production and new building permits – were associated with increased rates of on-the-job injuries.

The analysis showed that labor utilization was a significant factor underlying these increases. The study's authors suggest that "increased hiring, an increased share of inexperienced workers, or faster, more fatiguing work during expansion could contribute to higher rates of workplace injuries." Expanding overtime hours could also be a factor. The researchers also cite a second study indicating that the large number of relatively small firms in construction – companies that may be more financially constrained and reliant on temporary or contract workers – make the industry more sensitive to changes in the business cycle. The authors theorize that construction's "complex pyramids of control that are due to multiple subcontractors" could make workers more vulnerable when the industry suddenly expands.

With unemployment declining – it has dropped to 8.6 percent from a high of 20.6 percent in 2010 – construction contractors who wish to maintain their current injury rates to preserve favorable experience modification ratings (EMRs) should note the potential threat and focus more on appropriate safety adjustments.

A company's EMR is directly affected by the severity, duration and frequency of on-the-job injuries, but frequency is the most significant factor. If a company experiences a significant bump in injuries, its EMR will rise, driving up the cost of workers' compensation insurance. And because the EMR is based on the rolling average of the earliest three years of a company's most recent four-year safety performance, it can take several years to erase a bad start during an economic expansion.

The authors suggest that construction contractors put more emphasis on adequately training workers and guarding against excessive fatigue of their workforce during the initial phases of an expansion.

The professional staff of the LHSFNA's OSH Division can assist signatory contractors in assessing worksite situations and devising appropriate company safety and health programs. For more information, contact the Division at 202-628-5465.