For the past four years, Dr. David Rempel and development engineer Alan Barr have worked to design a universal drill jig that can relieve construction workers from the extreme physical stresses endured during concrete and rock drilling (see New Device Takes Strain Out of Overhead Drilling). 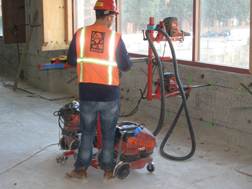 Tunnel construction and necessary seismic upgrades of large buildings have created significant demand for such drilling on the West Coast. Rempel and Barr, based respectively at UC-San Francisco and UC-Berkeley, met the challenge with successive versions of their new device, which reduces the fatigue associated with drilling hundreds of dowel holes in concrete with a heavy, hand-held pneumatic or hammer drill. Early versions of the jig were tested and evaluated at the Terence J. O'Sullivan Laborers' Training Center in San Ramon.

In 2012, the UCSF team tested different versions of the jig on construction sites across the Bay Area. Worker and contractor feedback informed important improvements:

Now, the jig is gaining fans across the country. Massachusetts Electric Construction is using ten rigs, each bearing two drills, on a year-long tunnel project in Chicago. McCarthy Construction, a commercial building contractor, is using ten rigs on an eight-story renovation in San Francisco. The project involves drilling more than 20,000 holes over a three-month period; the jigs in use speed work by drilling two perfectly spaced holes simultaneously.

Equally important, Rempel and Barr have enlisted the drill jig in the war against silica hazards. Tasks like dowel drilling and overhead or lateral drilling in rock or concrete can generate significant amounts of dangerous airborne crystalline silica. Workers who inhale the particles are vulnerable to silicosis and related respiratory problems, an occupational health concern severe enough that OSHA has proposed a new rule requiring more stringent workplace controls.

To combat this scourge, Rempel and Barr have incorporated a new dust capture system on the drill. Dust control is achieved by one of two methods; the most common is a dust shroud over the bit that attaches to the jig. A new innovation from Hilti, using a hollow bit with a vacuum port, was deployed on the McCarthy project. The vacuums are mounted on the jig for ease of movement.