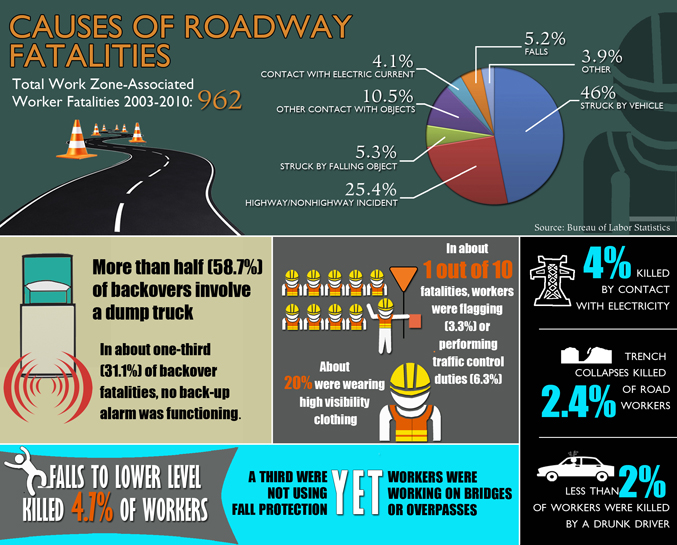 Each year, about 100 road construction workers are killed on the job.

"Inside work zones, the most common fatalities are workers struck or backed over by dump trucks or other construction vehicles," says LIUNA General Secretary Treasurer and LHSFNA Labor Co-Chairman Armand E. Sabitoni, noting that many of these tragedies can be prevented through the better use of internal traffic controls, technology, planning and proper training.

"Unfortunately," Sabitoni continues, "the other major problem – intrusions, motorists crashing into work zones and hitting workers – is a lot harder to control."

A new analysis from the Bureau of Labor Statistics(BLS) shows that of 962 workers killed between 2003 and 2010 in work zones, about 20 per year were struck by construction vehicles and another 20 by motorists in cars, vans or other vehicles. Some of the motorists were drunk or “distracted" (talking on their cell phones) drivers. Many were also drowsy drivers as much road work has shifted to night hours (37 percent of worker fatalities occurred between 10 pm and 6 am).

Traditionally, protection efforts have focused on slowing down drivers in work zones, often by doubling fines for speeding. But that may have limited impact with drunk or distracted drivers. A drunk driver probably cannot make a rational decision about the risk of entering the work zone and hitting someone. A distracted driver is simply not paying attention. A threatening sign probably will not change either's behavior. So what can help protect against intrusions?

Barrels or cones will not keep speeding motorists out of work zones. For long term projects, however, a ready solution exists: road closures, diversions and crossovers to effectively separate the work from the traffic. Positive protection, such as concrete (Jersey) barriers, can block intrusions and should be required whenever practical.

But some, such as state DOTs, are reluctant to require these barriers on short-term jobs because of the expense. What other options are there?

"It is difficult to change the behavior of motorists," says Sabitoni. "But we can and must institute protective measures like positive barriers and other available controls. They will help protect LIUNA members who are exposed to traffic every day while repairing our nation’s highways."

The LHSFNA has a variety of publications that address work zone safety. Among them are the Positive Protection brochure, the Internal Traffic Control Plans booklet and the Highway Work Zone Safety Checklist. Visit the online Publications Catalogue and click "Work Zone Safety" for more options.