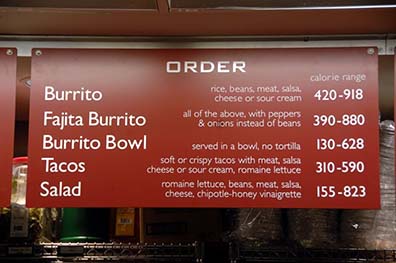 New Information on Your Restaurant Menu

It’s going to be harder to scarf down a breakfast sandwich every morning and be unaware of all of the calories in it. Ditto for that ready-to-eat dinner picked up at the grocery store, the hamburger with all the fixings ordered at lunch and those enticing vending machine snacks. 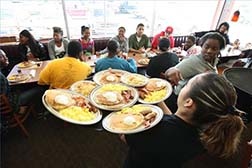 In its ongoing efforts to curb America’s obesity epidemic, the Food and Drug Administration (FDA) has issued new rules that require chain restaurants, retail establishments that sell food products – convenience stores, movie theaters, etc. – and vending machines to post calorie counts and other nutrition labeling on menus and menu boards. According to the Centers for Disease Control and Prevention (CDC), more than one-third of adults in the United States and more than 12 million children and adolescents are obese. (In Canada, where one in four adults and one in 10 children are obese, similar regulations are being introduced in the province of Ontario.)

The rules are mandatory for restaurants and other establishments that sell food at 20 or more locations. They apply to prepared foods intended for one person – sandwich, salad, bowl of soup, etc. – but not whole food items like a loaf of bread or a rotisserie chicken. The restaurant rules will go into effect within the next year. The vending machine rules will be implemented in two years.

Foods that will have calories counted include:

“Americans eat and drink about one-third of their calories away from home and people today expect clear information about the products they consume,” said FDA Commissioner Margaret Hamburg in announcing the rules. “Whether we choose to eat french fries or a tuna sandwich, those selections should reflect informed decision making. That can only happen if the right information is available to make those choices.””

Calorie posting on menus became a requirement with the passage of the Patient Protection and Affordable Care Act in 2010. Challenges from pizza chains, movie theaters and several other businesses that sell food delayed implementation, but some national food chains including McDonald’s, Panera Bread and Starbucks have started providing this information.

“It’s the right thing to do,” Greg Watson, Senior Vice President of Menu Innovation for McDonald’s, said in 2012, when the fast-food giant began displaying calories alongside its offerings. “It's what a leader would do.”

“[A]nyone dining out can have clear, easy-to-use nutrition information at the point of ordering – information that is presented in the same way, no matter what part of the country. From Portland, Oregon to Portland, Maine, diners in restaurants will have a new tool to help them make choices that are right for them,” the NRA said in a press release.

On the other hand, the National Grocers Association (NAG) calls the requirements a “costly regulatory burden.” The NAG said it “will continue to work with Congress to pass bipartisan legislation to address this regulatory overreach.”

Although posting calories is now mandatory, questions remain about its effectiveness. Surveys in New York City, where menus have included calorie information since 2008, and in Philadelphia, which followed suit in 2010, indicate that most consumers, particularly those who are low-income, ignore or don’t notice the listings and continue to eat as they always have.

“We found no difference in calories purchased or fast-food visits after the introduction of the policy,” said study author Dr. Brian Elbel, assistant professor of Population Health Policy at New York University School of Medicine. “Given the limits of labeling reported here and in other studies, it’s clear that just posting calories is often not enough to change behavior among all populations. We need to consider other, more robust interventional policies in places where obesity is most prevalent.”

The LHSFNA offers a number of materials designed to help Laborers improve their dietary choices and exercise habits and maintain healthy weight. These include the Nutrition & Fitness for Laborers training manual and its Nutrition & Fitness for Laborers and Build a Better Body brochures. Order these and other health and safety materials developed by the Fund’s expert staff by clicking on Publications.