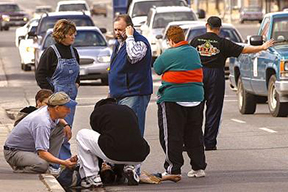 Good Samaritan laws offer limited protection to someone who attempts to help a person in distress. Common examples might include someone who is experiencing chest pains or fell and hit their head on the sidewalk. Good Samaritan laws are written to encourage bystanders to get involved in these and other emergency situations without fear that they will be sued if their actions inadvertently contribute to a person’s injury or death. This is important as seconds often count in an emergency and giving first aid before the ambulance arrives can be the difference in whether someone lives or dies.

Good Samaritan laws exist in both the U.S. and Canada, but the legislation isn’t uniform. Most laws don’t apply to medical professionals when they are on the job, but do offer some protection when they respond to an emergency off the clock. Many Good Samaritan laws, such as those in Virginia, Pennsylvania and Delaware, cover anyone who attempts to help in an emergency, while others are specific to certain situations. For example, Alabama’s law only extends to trained rescuers and public education employees unless the emergency is cardiac arrest, at which point anyone can get involved. In Oklahoma, Good Samaritan protection only covers bystander emergency assistance related to CPR or controlling bleeding.

Statutes typically don’t protect a person who provides care, advice or assistance in a willfully negligent or reckless manner. However, like any type of legislation, Good Samaritan laws are interpreted in court and the results may not benefit the bystander.

For example, a bystander in California who witnessed a car accident and pulled the victim from the vehicle out of concern that it would catch fire was later sued by the victim, who was left permanently paralyzed. The bystander won the lawsuit but the decision was later reversed by an appeals court that ruled she didn’t provide medical assistance. California has since changed its Good Samaritan law to include providing non-medical assistance at the scene of an emergency.

Unintentional drug overdose is a leading cause of death in both the U.S. and Canada and construction workers are among those most at risk. Witnesses to an overdose often don’t call for emergency assistance because they’re afraid of being arrested for drug-related crimes. In response, some states and Canada have enacted Good Samaritan laws that provide some legal protection for people who call for help. For example, they may offer protection from being prosecuted for low-level drug offenses like sale or use of a controlled substance or paraphernalia. However, as with other Good Samaritan legislation, overdose protection isn’t uniform and varies by location.

Do You Have to Give Assistance?

In most instances, a bystander can’t be held liable for not providing assistance. However, there are exceptions. Good Samaritan laws in Vermont, Minnesota and Rhode Island require bystanders to act in some limited capacity. In Canada, residents of Quebec can also face legal consequences for not giving aid. However, that doesn’t mean putting yourself in danger like entering a burning building or moving a person who has fallen and may have injured their neck – in both cases it’s best to wait for emergency medical personnel. In more common emergency situations, like assisting someone who is feeling dizzy or confused, Good Samaritan assistance can be as simple as providing a blanket, offering water or calling 911.