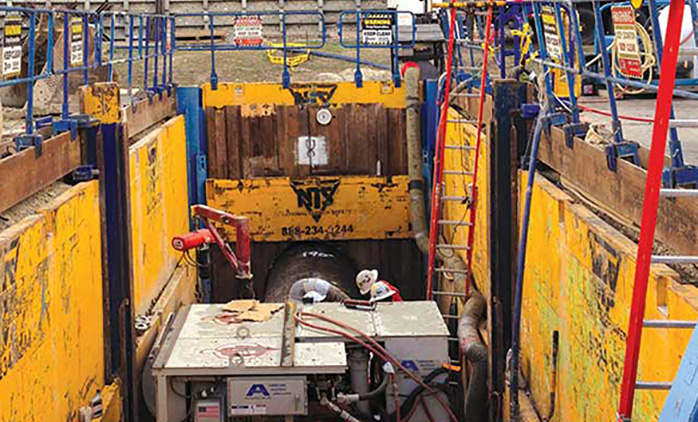 According to the Bureau of Labor Statistics (BLS), trenching and excavation-related deaths nearly tripled between 2011 and 2016. That equates to 130 worker deaths during that time period.

“As construction activity has continued to grow, an increasing number of workers have been killed in trenches,” says LIUNA General President Terry O’Sullivan. “We must all work together to ensure the safety of every worker who enters a trench. The hazards that trenches can present are well-known, and the steps that must be taken to protect worker safety have been proven time and time again in the construction industry.”

Now, OSHA is moving to address this spike in trench fatalities through increased enforcement efforts. OSHA has revised its National Emphasis Program (NEP) for trenching and excavation to better target those contractors who continue to disregard OSHA’s trenching and excavation standard. Trench fatalities are preventable and OSHA believes that compliance with the standard is the key to preventing more trench injuries and fatalities.

Trench Fatalities by the Numbers

As Deputy Assistant Secretary of Labor for Occupational Safety and Health Loren Sweatt said, “Removing workers from and helping workers identify trenching hazards is critical. OSHA will concentrate the full force of enforcement and compliance assistance resources to help ensure that employers are addressing these serious hazards.”

OSHA’s NEP for trench and excavation activities began in October of 2018, although enforcement doesn’t begin until January of 2019. Prior to initiating the enforcement stage, OSHA area offices and regions conducted outreach to contractors and owners. Although the new NEP supersedes OSHA’s prior Special Emphasis on trenching and excavations, the older NEP remained in effect during the 90-day outreach period. Because of this, it would seem that contractors could still have been cited under the older NEP during the outreach period.

OSHA’s updated special emphasis program mandates that OSHA compliance officers review all trenches they come across, regardless of the circumstances. In other words, whenever compliance officers see a trench or excavation, they are expected to stop what they are doing – whether on duty or not – and review the trench for compliance.

Now is a good time for construction firms, contractors and any company with a major building project to review their policies, procedures, training and compliance when it comes to trenching and excavations. Employers should be making sure that crews in the field are following proper procedures and conducting all necessary inspections each and every day. It’s a good idea for contractors to ensure that every trench deeper than 4-5 feet employs OSHA’s cave-in prevention requirements of sloping, shoring or shielding. In addition, employers should be sure to:

LIUNA signatory contractors and affiliates can order the Fund’s Safety in the Trenches booklet or Excavation and Trench Safety toolbox talk for more information about protecting workers who enter trenches. The LHSFNA’s OSH Division is available to assist LIUNA signatory contractors by visiting job sites and inspecting the safety of trenches and excavations. To request assistance or to contact us about other safety and health questions or concerns, call the Fund at 202-628-5465.