How Safe Is Your Well Water? 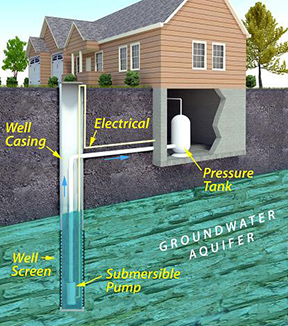 There’s been a lot of news in recent months about the integrity of water systems maintained by municipalities, but people who get their drinking water from private wells also need to keep an eye on what comes out of their faucets. According to the U.S. Geological Survey (USGS), at least 20 percent of private wells contain contaminants, of which 23 percent have levels high enough to be a potential health concern.

Private wells are exempt from Environmental Protection Agency (EPA) drinking water regulations that impose legal limits on more than 90 contaminants. (Some states and local governments set their own drinking water rules.) That means it’s the responsibility of the well’s owner to ensure the safety and quality of water before it reaches the tap. The Centers for Disease Control and Prevention (CDC) recommends that owners test well water once a year.

How does well water get contaminated?

Wells supply drinking water to about 43 million people in the United States, or about 15 percent of the nation’s population. The source of this drinking water is groundwater found in underground aquifers. Groundwater comes from rainfall that is absorbed in soil but not used by plants and trees. This excess slowly seeps downward, traveling several inches a day through porous rocks and underground spaces. Along the way it can sometimes pick up contaminants that make people sick. In recent years, outbreaks of norovirus, salmonella and hepatitis A have been traced to contaminated groundwater.

Common sources of contamination include:

Can contaminants be invisible?

Sometimes hazards aren’t obvious – they have no taste, odor or discoloration – nor cause immediate health effects. Arsenic is one such hazard. A recent study published in the Journal of the National Cancer Institute shows a connection between arsenic in well water and the elevated risk for bladder cancer that’s been observed in Maine, New Hampshire and Vermont for over 50 years. A unique characteristic of these New England states is the high proportion of the population that gets its drinking water from private wells.

Arsenic occurs naturally and is often found in groundwater. The EPA has determined that groundwater arsenic levels of 0.01 mg/l (10 parts per billion) are safe. However, researchers believe arsenic-based pesticides used on crops in Maine, New Hampshire and Vermont during the middle half of the 20th century increased arsenic concentration in groundwater to hazardous levels. Even after taking into account that smoking and industry are responsible for most toxic exposures to arsenic and for most bladder cancer risk, researchers found that people who primarily drank well water were almost twice as likely to get bladder cancer as those who didn’t.

“There are effective interventions to lower arsenic concentrations in water,” said Dr. Debra Silverman, chief of the National Cancer Institute’s Occupational and Environmental Epidemiology Branch and senior author on the study. “New England has active public health education campaigns instructing residents to test their water supply and to install and maintain filters if levels are above the EPA threshold.”

And New England isn’t the only place where high levels of arsenic in well water have been detected. The USGS found that seven percent of drinking wells nationally have concentrations of arsenic greater than what the EPA deems safe. 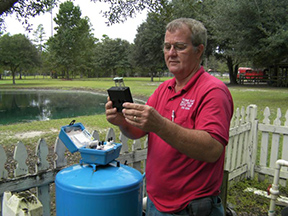 The National Groundwater Association (NGWA) recommends well owners test their water at least annually for bacteria, nitrates and any contaminants of local concern. Testing is recommended more often if there are changes in taste, odor or color.

Who should test your well?

County health departments can conduct water tests for bacteria and nitrates. If you want to test for other substances, ask them for a list of state-certified drinking water testing labs. You can also call the NGWA’s toll-free Private Well Owner Hotline at 855-420-9355. Do-it-yourself tests are also available for sale at certain retailers, but read the reviews before you make a purchase.