The Food and Drug Administration (FDA) has issued a proposed rule to restrict how electronic cigarettes are marketed. When it becomes final later this year, it is expected to require:

The proposal comes amid a forecast of surging sales for e-cigarettes, an uptick in calls to poison control centers related to e-cigarette use and the release of a congressional report from 11 Democratic lawmakers that shows how manufacturers tailor promotions of e-cigarettes to attract minors.

“From candy flavors to rock concert sponsorships, every single company surveyed in this report has employed a marketing strategy that appears to target youth,” said U.S. Senator Dick Durbin (D-IL) who issued a release on the findings. “For years, federal regulations prohibiting tobacco companies from targeting young people have helped to protect a new generation of smokers from getting hooked on nicotine. Now, we must close this new gateway to addiction to protect our children.”

Examples in the report of youth-targeted marketing include tobacco companies’ sponsorships of high-profile events such as the Bonnaroo Music Festival, the Red Bull Wake Open and Grand Prix motor racing. Free samples of e-cigarette products have been standard with all of these sponsorships. 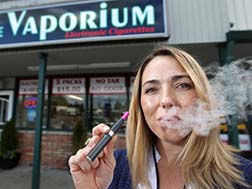 E-cigarettes are designed to simulate tobacco smoking. A battery heats up a liquid-filled cartridge, creating a flavored vapor that, inhaled, makes the device flare like a traditional cigarette. When these “e-liquids” contain nicotine – some do not – users get a fix that is free of the carcinogenic substances found in tobacco smoke. E-cigarette proponents argue that “vaping” is safer than smoking. This is also what makes e-cigarettes attractive to some smokers who are trying to quit, although there is no evidence that the devices are more effective than FDA-approved nicotine replacement therapies.

Unlike traditional tobacco products, which the FDA has control over, there is currently no federal age requirement for purchasing e-cigarettes. Unless you are in one of the 34 states (the number when this article was published) that have implemented their own age requirements, anyone can purchase e-cigarettes and many young people do. According to the Centers for Disease Control and Prevention (CDC), the percentage of U.S. middle and high school students who use e-cigarettes more than doubled from 2011 to 2012. (E-cigarettes that contain nicotine are not approved for sale in Canada although some merchants are fighting the order.)

As interest has grown for e-cigarettes, so have calls to poison centers related to swallowing liquid nicotine, absorbing it through the skin or splashing it in the eyes. Vomiting, nausea and eye irritation have resulted. According to the CDC, between September 2010 and February of this year, these calls jumped from one per month to 215 per month. More than half concerned children under the age of six who may have been attracted by the solutions’ sweet fragrances and bright colors.

“It’s not a matter of if a child will be seriously poisoned or killed,” said Lee Cantrell, director of the San Diego division of the California Poison Control System and a professor of pharmacy at the University of California, San Francisco in a recent interview with The New York Times. “It’s a matter of when.”

The American Association of Poison Control Centers recommends the following steps for the safe handling of e-cigarettes: