During OSHA’s April silica hearings, many industry groups used this NIOSH graph to support their claims that silicosis is a disease of the past. This graph shows the number of silicosis deaths declining from over 1,000 per year in the early 1970s to less than 100 per year in 2007. 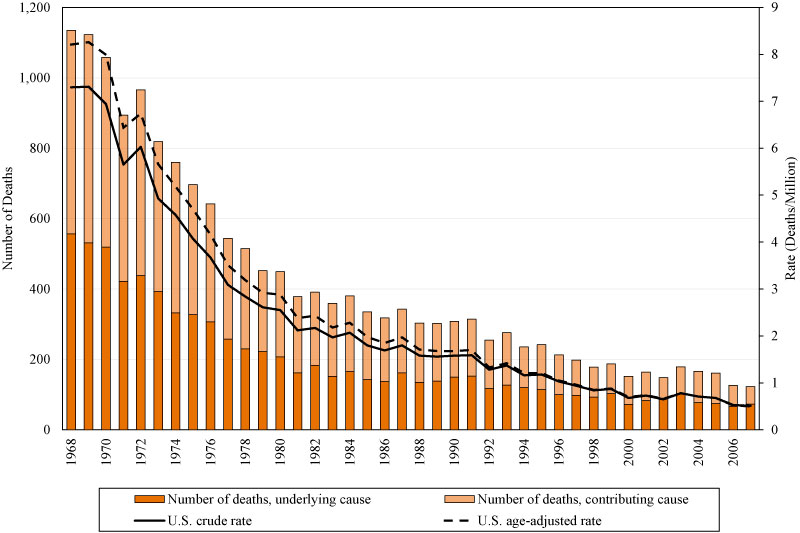 But this graph doesn’t tell the whole story – silica continues to be a persistent problem in construction. First, it only list deaths where silicosis is named on the death certificate, but silicosis is often overlooked as a cause of death. In many cases, heart attack, respiratory disease or a number of related disorders are listed instead. For example, X-rays showed that 8.5 percent of construction workers whose cause of death was listed as “respiratory disease” actually had silicosis, but it was not mentioned on the death certificate.

This graph also ignores the large number of people still living with silicosis and those who die from other silica-related diseases like lung cancer, chronic obstructive pulmonary disease (COPD) and renal disease.

Those who think silicosis is a problem that’s already been solved should look no further than a study of over 1300 Dutch construction workers. Chest X-rays revealed 10 percent of them showed early signs of silicosis after only 19 years of exposure. The Dutch permissible exposure limit (PEL) is 75 µg/m3 – far lower than OSHA’s current 250 µg/m3 PEL for construction. Clearly, even at levels only slightly higher than OSHA’s proposed 50 µg/m3 PEL, there is a significant risk to construction workers.

The most effective way to reduce exposure to respirable crystalline silica is through the use of engineering controls. The National Asphalt Pavement Association has already demonstrated that it’s possible to reduce exposures below OSHA’s proposed PEL with the use of controls. These simple methods, such as water sprays and local exhaust ventilation, can reduce exposures by 80-95 percent depending on the task. In most cases, an exposure reduction this drastic is enough to bring operations below the proposed PEL, eliminating the need for constant exposure monitoring or the use of respirators.

The infographic below shows how much effective controls can lower exposures for common silica-generating tasks, and also shows how many lives could be saved by reducing exposures to the proposed PEL.

Saving 262 lives for every 1,000 construction workers who are exposed to silica is a staggering number, and is exactly why OSHA’s proposed rule on respirable crystalline silica is so important.