Protect Yourself from Ticks
and Lyme Disease 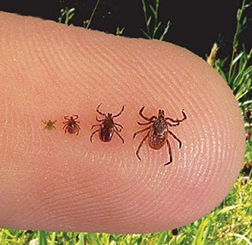 It’s only about the size of a pinhead, making it a hazard that is very easy to miss, but the deer tick is one of the biggest threats to the health of construction laborers who work on road crews and at other outdoor jobsites.

Deer ticks (also called blacklegged ticks) carry Lyme disease, a debilitating bacterial illness that can lead to permanent damage to the nervous system and joints. Deer ticks thrive in grassy and heavily wooded areas throughout the United States and Canada, but are particularly prevalent in the Northeast, Mid-Atlantic and North-Central regions.

Ticks tend to be most active from spring through early fall. Unfortunately, this coincides with the busiest time of year for the construction industry. Anyone who spends time outdoors during these months needs to take precautions and be aware of Lyme disease symptoms, some of which are subtle. Patients who are treated early with the appropriate antibiotics usually make a complete recovery. Lyme disease that goes untreated can lead to chronic arthritis, impaired memory and heart rhythm irregularities.

How to Safely Remove a Tick

The bacterium that causes Lyme disease – Borrelia burgdorferi – can be transmitted when a deer tick attaches itself somewhere on the body and feeds for at least 36-48 hours. Symptoms of infection can develop within weeks, but other times can take months to appear.

The LHSFNA has a Health Alert on Lyme disease that can be placed inside paycheck envelopes and also fits inside glove compartments and lunchboxes. Order this and other health and safety materials by clicking on Publications.