“Motorcycles are a popular choice when it comes to getting around during the summer months, especially among construction laborers,” says LHSFNA Management Co-Chairman Noel C. Borck. “They are fuel efficient and fun to drive, but they also bring a greater chance for serious injury or death for those involved in crashes.”

According to the Insurance Institute for Highway Safety, motorcyclists are 30 times more likely to die in a crash than people in a car. Numerous public safety campaigns have reminded motorists to look out for motorcyclists and share the road. But despite these warnings, motorcycle fatalities have increased in 14 of the last 15 years.

Some of this increase can be explained by motorcycles becoming more popular, which has led to more motorcyclists on the road. However, a recent CDC study linked the rising death toll to another factor – one that could push the number of motorcycle deaths even higher.

Motorcycle helmet laws vary a great deal from state to state. Currently, 19 states and the District of Columbia have universal helmet laws, meaning all riders must wear a helmet at all times. After that, it gets more complicated, with most states having partial helmet laws. Some states require helmets for riders under a certain age (usually 17 or 21), while others don’t require helmets if riders carry a minimum level of medical insurance or have completed a safety course. Only three states have no helmet laws at all. To see what the rules are in your state, take a look at this map. 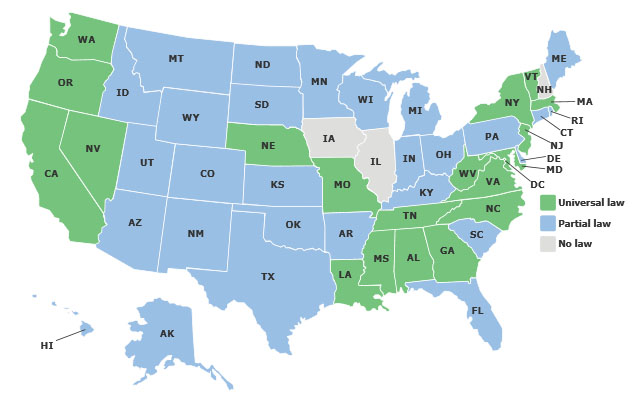 More states used to have universal helmet laws, but many have replaced them with partial helmet laws. Florida did so in 2000, followed by Pennsylvania in 2003 and Michigan in 2012. In each state, fatal motorcycle crashes increased sharply after the laws were relaxed. Fatalities rose 31 percent in Texas and 21 percent in Arkansas after those states repealed their universal helmet laws in 1997. This interactive graphic shows how a majority of the growth in motorcycle deaths comes from those not wearing helmets. 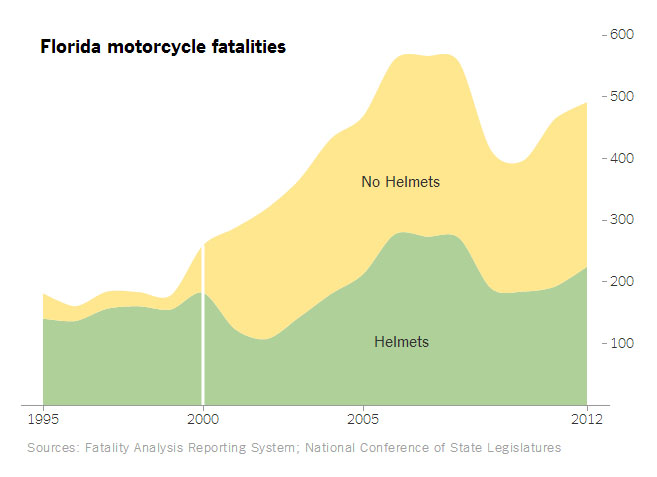 Unfortunately, the majority of people who aren’t forced to wear helmets choose not to. A 2010 survey found that 98 percent of motorcyclists wore helmets when the law called for it, yet only 48 percent of riders put on a helmet when they had a choice. The number of motorcycle deaths could rise further, as eight of the 19 states with universal helmet laws are considering weakening or repealing them in 2014.

“Helmets are the most effective way to prevent serious injury and death in a motorcycle crash,” says Borck. “But instead of mandating this lifesaving safety device, many states are moving in the wrong direction.”

Choosing to ride a motorcycle brings added dangers, but plenty of people still manage to do so safely. There are several precautions riders can follow to drastically decrease their chances of getting in an accident that leads to serious injury or death.

The LHSFNA helped create an extensive roadway safety awareness program as part of the Federal Highway Administration’s Roadway Work Zone Training Consortium. This program includes guidance on how to make work zones safer for motorcyclists and bicyclists. To get this program in its entirety, order the Roadway Safety Program DVD from the Fund’s Publications Catalogue.