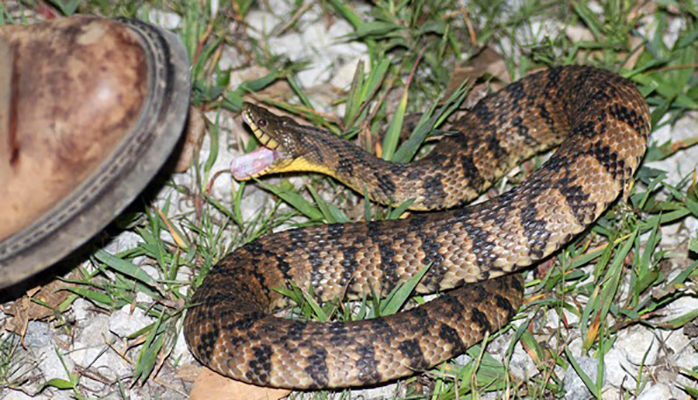 When a construction crew repairing the Boundary Bay Dike in Delta, British Columbia unearthed a den of more than 500 hibernating garter snakes, it made headlines. However, the only thing unusual was how many there were.

“Encounters with snakes are not uncommon when you work in outdoor construction or in flood and hurricane cleanup,” says LHSFNA Management Co-Chairman Noel C. Borck. “Being familiar with the snakes that are common to a particular area and knowing what to do when you find one can keep a run-in from leading to a painful bite and time away from work.”

The Skinny on Snakes

Can you tell the difference?

Snakes are around all year but are most active between April and October when warm weather brings them out to mate. Venomous snakes, including rattlesnakes, copperheads, coral snakes and cottonmouths (water moccasins) are found throughout the United States and Canada. The U.S. and Canada are also home to more than 100 types of non-venomous snakes.

Snakes are not aggressive and will only bite if they are startled or feel threatened. About 45,000 snakebites occur every year in the U.S. – 7,000-8,000 of which are from venomous snakes. Fortunately, because of ample access to lifesaving antivenom, a neutralizing medicine, people in the U.S. rarely die after being bitten. According to the Centers for Disease Control and Prevention (CDC), snakebites kill about five people in the U.S. every year. However, venomous or not, snakebites hurt.

These precautions can reduce your risk of being bitten: 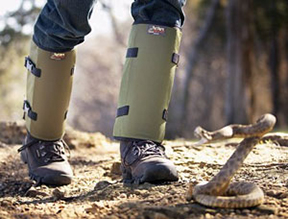 If you or someone you are with is bitten: 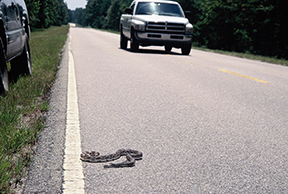 Although most people don’t like snakes, their diet of rodents and insects actually makes them helpful to have around. Snakes should not be killed when they are found. Many are protected under the Endangered Species Act (ESA). Harming them can lead to jail time and fines of up to $50,000. That’s more than most OSHA fines.

Contact an animal control agency or a local wildlife management organization if a snake or snakes are found at a construction site or in your home. Those 500 garter snakes in British Columbia were removed to a wildlife rescue facility while construction workers finished repairing the dike. Once the project was completed, the snakes were returned.

“We are pleased that over 95 percent of the snakes have survived the ordeal,” said a spokesman. “Human activity can impact wildlife in so many ways but by being proactive, the [construction company] minimized the disruption caused and ensured that the vast majority of snakes were unharmed.”