The COVID-19 pandemic has brought an increased focus to sanitation and hygiene practices on construction sites across North America.

In Canada, British Columbia Building Trades Council Executive Director Andrew Mercier summed up the issue by saying “The pandemic has exposed a culture of non-compliance in certain segments of our industry.”

While the potential for lack of proper sanitation and hygiene practices may have been news to those unfamiliar with the industry, it likely wasn’t a surprise to many female construction workers. In our March article, “Improving Safety & Health for Women in Construction,” we identified inadequate or unsanitary toilet facilities as one of several health and safety concerns that can affect all workers on site, but that has a disproportionate effect on female construction workers. Other issues in this category include ill-fitting personal protective equipment (PPE), bullying and harassment, increased risk for sprains and strains and reproductive hazards in the workplace.

These issues may help explain why the percentage of female frontline construction workers in the U.S. continues to hover below four percent. But in Canada, particularly in the Western provinces, these numbers are starting to shift. In Alberta, women now make up 15 percent of the construction workforce; the province estimates that five percent of all frontline workers are women. More promising is the estimate that over the next ten years, one third of all women who enter the construction industry will go into trades directly related to construction projects. So what are construction trade groups and labor groups in Canada doing to create these results?

LIUNA Taking Action to Grow Number of Women in Trades

First, LIUNA and several other trade unions in Canada collaborated to launch the Community Building Standard, which pushes for public construction projects to hire locally and bring underrepresented groups – specifically indigenous people, youth and women – into the construction workforce.

These same goals have also been a focus with LIUNA signatory contractors. In 2019, LIUNA partnered with Aecon, one of Canada’s largest construction companies, to deliver apprenticeship training to an all-female class. When Aecon started their Women in Trades program, they looked to LIUNA to deliver those workers.

Sandro Pinto, Executive Director of LIUNA Local 183’s Training Center, said “There is no reason why women can’t work in the construction industry. … The union is going to support a woman as it supports a man.”

Within LIUNA, Locals in Western Canada recently came together to launch a committee called POWER – Progressive Organizing of Women for Employment and Retention. The committee includes a female LIUNA representative from each province in Western Canada, and its goal is to identify issues facing women in construction and then create changes in the workplace that lead to a better working environment for both genders.

The POWER committee also joined another initiative launched by North America’s Building Trades Unions (NABTU) called Lean In Circles for Union Tradeswomen. Lean In meetings connect tradeswomen together and help give them the skills to navigate bias and be their own advocates in the workplace. Programs like these are important to help women in the trades build a strong network of peers and have a voice in addressing issues they encounter and steering the conversation about equity at work. Lastly, the POWER committee joined the Canadian Apprenticeship Forum’s new task force to oversee the development of a national strategy for women in the trades. 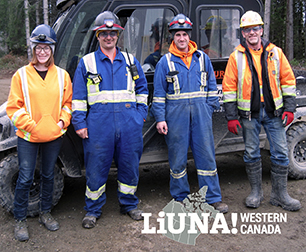 Welcoming Women into the Industry

Beyond legislation and large-scale initiatives, growing the number of women in the construction industry comes down to small, daily decisions that send a consistent message – women are wanted here, valued here and will be treated equally here.

That may mean making sure female field workers are represented at your next trade show or job fair, so that potential apprentices can see someone who looks like them when they walk by. It may mean putting ourselves in the shoes of the lone female apprenticeship in a classroom full of men and seeing an opportunity to create mentorship programs. Identifying issues facing women in construction is easy; the challenge is to take action.

In 2014, women made up 47 percent of the workforce in Canada, yet only a fraction worked in construction. In a Canadian labor market where skilled workers are in extremely high demand, the unions and contractors who open their doors to women stand to gain huge numbers of new members and employees.