Are You Ready for Tornado Season?

Tornadoes cause millions of dollars in property damages and loss of life each year, and with spring fast approaching, the likelihood for them increases. About 1,000 tornadoes occur in the United States every year, more than any other country. On average, tornadoes kill about 60 people annually. Most of these deaths are caused by flying and falling debris.

“Tornadoes occur most frequently in the central region of the U.S., but the conditions that spawn these violent storms can happen anywhere,” says LHSFNA Management Co-Chairman Noel C. Borck. “No matter where you live and work, it’s important that you know what to do when a tornado touches down. According to the National Oceanic and Atmospheric Administration, by the time a tornado warning is issued, you’ve got at most about 13 minutes to prepare.”

When a Tornado Warning Is Issued

Minimizing tornado damage is the goal of new building codes recently approved by the International Code Council (ICC). The updated codes apply to the nation’s most tornado-prone areas: from northern Texas to central Minnesota and from western Oklahoma to western Pennsylvania. They pertain to new schools, additions to existing schools and other new buildings where children gather. They require the construction of storm shelters at these facilities that can withstand 250 mile-per-hour wind speeds, the strength of a maximum intensity or EF-5 tornado. 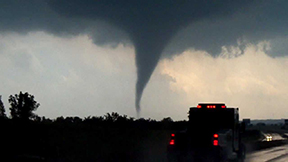 What Exactly Is a Tornado?

A tornado begins as a violently rotating funnel of air and moisture that sometimes develops at the base of thunderstorm clouds. The funnel does not become a tornado until it actually touches the ground.

How Are Tornadoes Measured?

The Enhanced Fujita Scale (EF) rates tornadoes by the damage they cause. The scale goes from EF-0 to EF-5, with EF-0 being the weakest. Types of buildings damaged, quality of construction and maintenance as well as size of trees in the area are all factors the EF-Scale takes into account.

The school building codes are the first set of regulations based on recommendations from a National Institute of Standards and Technology (NIST) study on the EF-5 tornado that struck Joplin, Missouri on May 22, 2011. That twister, which ranks as one of the nation’s deadliest, killed 161 people and injured more than 1,000. Property losses approaching $3 billion dollars also make it the most costly tornado on record. LIUNA members helped with storm cleanup in Joplin and the LHSFNA developed special health alerts for the cleanup work.

The NIST also called for the creation of national codes and standards for improving emergency communications when warning of an imminent threat of a tornado. The complete NIST report is available here.

The LHSFNA has a number of Health Alerts designed to help Laborers stay safe during tornado cleanup, including:

Order these and other materials by clicking on Publications.