Lead Poisoning in Flint, Michigan Is Only the Beginning

By now you’ve heard about the public health crisis that’s been plaguing the citizens of Flint, Michigan since April, 2014. The city’s decision to opt out of Detroit’s water supply and pull drinking water from the Flint River has been nothing short of disastrous.

Corrosive river water allowed dangerously high levels of lead to leach out of outdated pipes and into the water supply, causing lead poisoning in children and adults. The switch has also been blamed for an outbreak of Legionnaire’s disease that killed 10 people.

These issues led to a state of emergency and allegations that officials at various levels knew about the problem for months and didn’t act. “During this crisis, many groups have pitched in to help,” says LIUNA General President Terry O’Sullivan. “I’m proud to say that includes the Michigan Laborers’ District Council, as well as LIUNA members from Local 1191 in Detroit and Local 1075 in Flint, who helped install water filters and deliver bottled water to those in need, and members of Local 1776, who serve their country as part of the Army and Air Force National Guard. The Michigan Laborers’ Training and Apprenticeship Institute is also working hard to train new apprentices who could help replace thousands of lead service lines in Flint over the next year.”

Lead Tends to Stick Around

While the situation in Flint is ongoing, it unfortunately won’t be over even after the water is back to normal. Lead exposure causes irreversible neurological and behavioral issues in adults and children, but is especially harmful for kids. That’s because up to 50 percent of the lead ingested by children is permanently absorbed into soft tissue. By comparison, adults absorb about 10 percent. 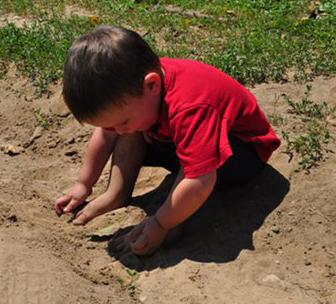 So where does the lead that isn’t absorbed into the body end up? The answer might surprise you: in our dirt.

This graphic shows how lead traveled from the Flint River to the homes of Flint’s residents. That same network of pipes carries unused water back into rivers and other bodies of water, where it ends up in soil. If it’s later disturbed – by children playing outside or by construction workers erecting a new building – harmful lead dust can be accidentally ingested, transferred to clothing and brought home.

The map below showing soil lead levels along the Mississippi River in New Orleans is only one example of this problem. Dangerously high levels of lead in soil have also been found in New York; Washington, D.C.; Philadelphia and many other urban and industrial areas. Growing evidence shows lead poisoning is a huge problem across much of the country. To see just how bad this problem is, check out this interactive map. 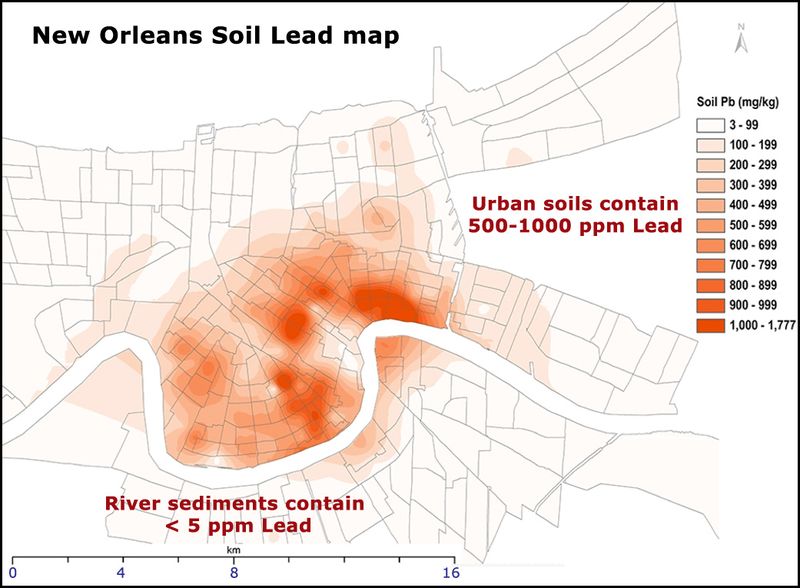 Some of this lead came from the years before the metal was banned, when factories routinely melted down products containing lead and released those fumes into the air. Want to know if you live near one of these old factories? Click here to find out.

The early symptoms of lead exposure are very hard to recognize. The only way to confirm if your child has lead poisoning is to have his or her blood tested. California’s Department of Public Health created two PDFs with more information on protecting children from exposure to lead near your house and in dirt. If you suspect lead exposure to your children or yourself, get your blood levels checked by your doctor as soon as possible.

Because lead particles can last for hundreds of years in the top few inches of soil, this lead will stay in place until it is covered, removed or disturbed.

Stopping Lead at the Source

Decreasing cases of lead poisoning in children and adults must start with raising awareness about this ongoing and pervasive problem. “These hazardous exposures can be mitigated or avoided,” says O’Sullivan. “State and local governments must make a commitment to updating and replacing a water distribution system that was built with materials we now know are toxic.”